How these vets are turning to theater to combat PTSD

How these vets are turning to theater to combat PTSD 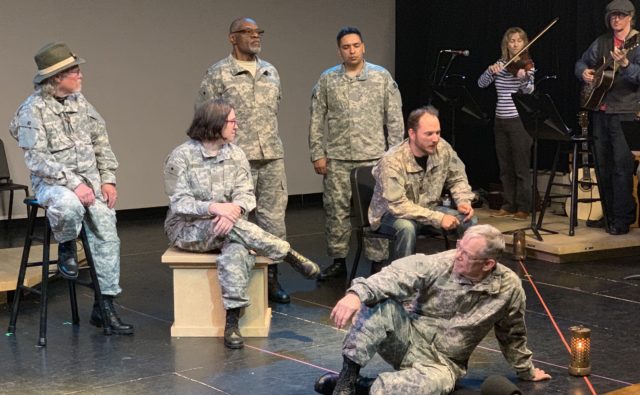 There’s no way to describe, to fully capture, the feeling of post traumatic stress disorder unless you’ve experienced it.

Even if you live with it, like many veterans, explaining the experience in your own words can be immensely difficult. And that communication breakdown can lead them to isolate themselves, to stifle their emotions.

But a group of Milwaukee veterans are tapping into their creativity and confronting their PTSD — using theater.

Learn about Feast of Crispian and its first ever National Veterans Theater Festival below.

“I only spent three years in the military, but it still has been a lifetime. Because it’s like I’m still there. I can’t leave there.”

For Larry Reed, 50 years can sometimes feel just like yesterday. He served in Vietnam, and still carries those three intense years with him.

“I served as a tank commander, platoon sergeant, retired as a first sergeant in an armor company,” Schleis says.

His military career spanned 24 years, eight times longer than Reed’s. But both men will say it’s not how many years you served; it’s what you experienced.

“Looking at a movie you’re watching, looking at the trees, or wherever you are, certain things bring it right back,” Reed says.

“The military is great at teaching us how to kill. They train you to take your emotions away. But when you come back, there’s nothing there to reintegrate us,” Schleis says.

Both men deal with symptoms of PTSD. They’ve tried therapy and medication with varying degrees of success. But nothing has affected them quite as intimately as… Shakespeare.

Right now they’re co-starring in a show called “And Comes Safe Home.” It’s a play blending their original stories with the words of Shakespeare.

“And you get to draw from your experiences. Your military experience or your life experience, and put it into that character,” Schleis says.

Nancy Smith-Watson is a program director and one of the founders of Feast of Crispian.

She says many vets, whether they loved or hated their military experience, come back missing the camaraderie of someone having their back. But she has seen theater fill that void for vets.

“No one piece of programming works for everybody, including ours. There’s lots of people who think that never in a million years Shakespeare would do anything for them, and they’re probably right.

“But a lot of the folks that come and see us, they’ve never had anything like this before. And it’s really turned a lot of things around for them. So we’re pretty devoted, and we’re pretty proud,” Smith-Watson says.

And for the veterans-turned-actors, the impact — even in a just a few a months — has been life changing.

“My saying is I get to unpack my duffel bag. I’ve had 24 years to pack my emotions away. Now I can unpack it,” Schleis says.

“I feel as though someone is helping me now,” Reed says.

Right now, Feast of Crispian is hosting its first ever National Theater Festival, running now through Sunday. In addition to the local performers, the organization is also bringing in players from around the country.