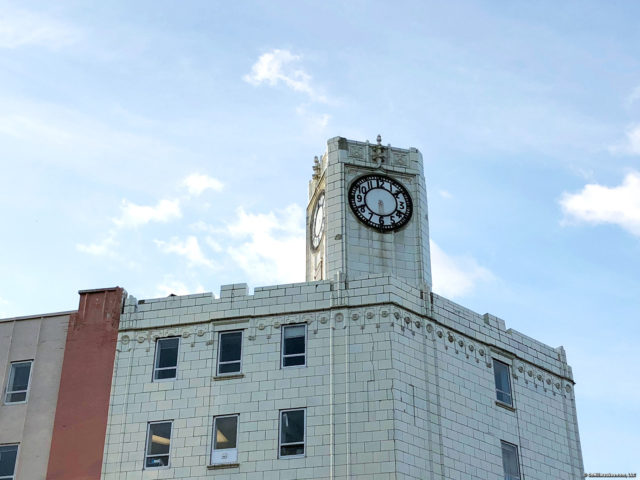 With just one look the photo below, you can probably place where this Milwaukee building stands. It has been helping East Siders keep time for nearly 100 years, after all.

This week on Urban Spelunking, we visit the Prospect Avenue clock tower on the corner of Prospect and North avenues.

Currently home to offices, a parking garage, a restaurant and other storefronts, the warehouse was built as a mixed use development in 1925. Built by the Coakley Bothers for their thriving moving and storage business, most of the space was used as a warehouse. It was even added onto as their business grew.

An early car dealership occupied the prime corner space, with a freight elevator used to shuttle cars up and down from the dealer’s stock. That elevator is still there, writes OnMilwaukee’s Bobby Tanzilo, who visited recently visited the space.

As businesses and tenants have come and gone over the years, the three-faced clock tower has been keeping time above, looking down on the busy East Side intersection.

In recent years, however, those heavy and aging clock hands begun to get out of sync, inaccurately displaying the time. It got so bad they had to be removed entirely, and the whole system was rebalanced and recalibrated.

But today, to the relief of those who look up, those hands are once again running in tandem.

Learn about the Milwaukee brothers who built this tower and a similar building on Wisconsin Avenue, plus more about the restoration process that got all three clocks back up and running.