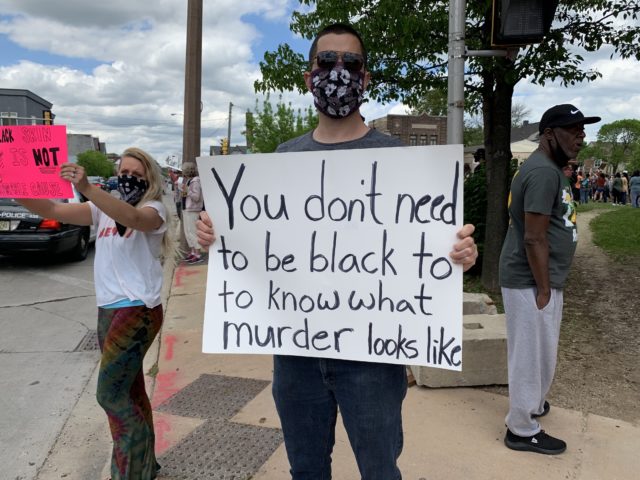 Protests erupted across the nation this week in response to the death of George Floyd, an unarmed black man from Minneapolis who was killed while in police custody on Monday, May 25. Today, one of the officers involved was charged with third degree murder and manslaughter.

Earlier this week, bystander video of his death circulated online, where multiple officers were seen kneeling on Floyd’s body. In the days following, protesters hit the streets in Minneapolis, with the situation eventually escalating to riots and looting in some areas.

But here in Milwaukee today, it was a much different picture.

Hundreds of protesters turned out — peacefully — at 27th and Center streets Friday afternoon. Community leaders led the crowd in chants at the busy intersection, prompting those driving by to sound their horns in solidarity.

After the assembly, the group marched in the streets, walking for miles along Fond Du Lac Avenue and assembling at the Milwaukee County Courthouse. As of the time of this writing, all protests have remained nonviolent.

88Nine was on scene at the beginning of the gathering and talked to participants. Listen to the audio story below.