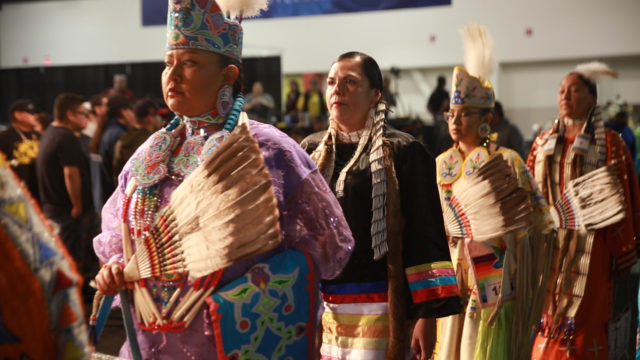 The Hunting Moon Pow Wow celebrated its 13th year in Milwaukee late October. It kicked off Native American Heritage Month, which is taking place all November.

(Video and audio below)

The Hunting Moon Pow Wow is the largest pow wow in Milwaukee. Thousands of Native Americans gathered at the Wisconsin Center throughout the weekend to celebrate Native American culture.

The celebration consisted of music, dance, food and vendors. From organic, Native American teas and beauty products to jewelry, clothing and “Indian tacos,” the celebration was in full effect.

Ronnie Preston of the Apache Nation also celebrated his 13th year of dancing at the Hunting Moon Pow Wow. Originally from Arizona, Preston now resides in St. Francis and teaches children at the Indian Community School in Franklin about Native American culture.

Over 50 tribes were in attendance at this pow wow. Local tribes such as Potawatomi, Oneida and Ho-Chunk were represented. Several generations from different tribes participated in the competition dance as well.

Children wore vibrant beaded blinders and danced freely to the drum call. The drumbeat, which is representative of Mother Earth’s heartbeat, inspires the dances and the way Natives express themselves.

Preston participates in pow wows year-round. He encourages non-natives to participate in these celebrations so they can learn more about one of the oldest surviving cultures that are deeply rooted in Milwaukee and Wisconsin.