If you’re at Summerfest, you can help create a Milwaukee song

If you’re at Summerfest, you can help create a Milwaukee song 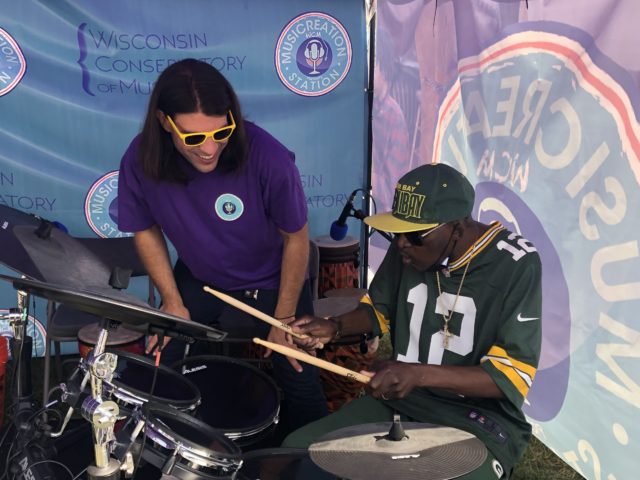 Have you ever wanted to make a song but didn’t have the proper equipment or didn’t know where to start? Well, if you’re headed to Summerfest, this is your opportunity. The Wisconsin Conservatory of Music is bringing a first of its kind mobile music lab, The MusiCreation Station, to Summerfest and they are asking people to help them in the creation of a Milwaukee song.

The station looks like a recording studio on wheels. Outside of the recording system, they have an electric drum kit, acoustic percussion instrument, bass guitar, electric guitar as well as vocal microphones. The goal of the music lab is to create a Milwaukee song. They are using a one-bed track, meaning a single stream of recorded sound, with the idea that anyone can add elements they prefer. At the end of the festival, Mike Standal, from the Wisconsin Conservatory of Music, starts the editing process.

“What we are going to end up with probably won’t be very similar to what we start with,” said Standal. “The last time I did this, hundreds of people participated, and what they did influenced my production choices.”

Even if you aren’t musically inclined, Standal insists that anything can be music, even if it’s just clapping your hands.

“There’s the trepidation of trying something new, I understand that and there is something about music where you are putting a little bit of yourself out there,” said Standal. “That can be a little intimidating at times, so at the conservatory, we are conscious of that. Whatever we do, we want it to be a safe space for expression.”

If you’re going to Summerfest and would like to participate in wondrous worlds of music-making, stop by the music creation station for the possibility of being part of a Milwaukee song.