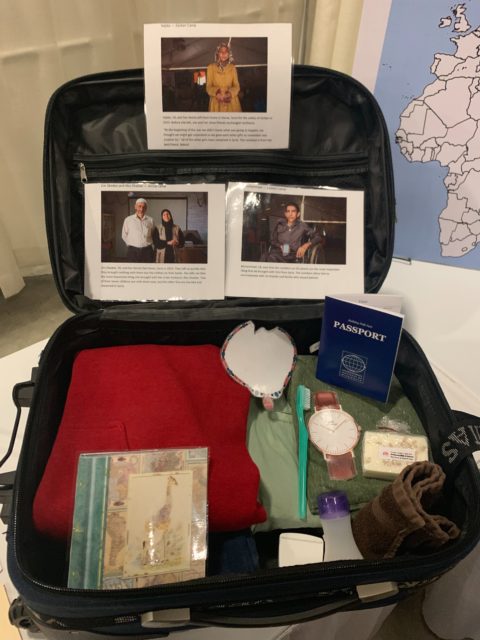 If you only had three minutes to grab your personal items from your home before fleeing your country, what items would you grab? Would you grab documentation? Would you grab sentimental items like your grandfather’s watch or a family photograph? Can you even pack up your life in three minutes? What about half an hour, is that enough time?

Those were the type of questions the International Institute of Wisconsin would ask people at their refugee both for the Holiday Folk Fair International this past weekend at the State Fair Exposition Center. Sasha Allen, one of the interns, said the main goal of the booth is to spread information.

“We just been trying to get the public informed on some of the issues that refugees have to go through,” said Allen.

The booth takes you on a journey of the process a refugee or refugee family has to endure to get to their host country. On the table stand, Hana El Omari, another intern, said she started the layout of the table with four terms.

“In the first section there are only four terms and it’s refugee, asylum seeker, displaced and stateless,” said El Omari. “In the beginning, I just wanted to define these so they can be familiar with what a refugee is.”

There were two main centerpieces one was a packed suitcase to illustrate the most common items refugees would bring with them. Allen said the other being the food rations an entire family would have when staying at the camps.

“In the refugee ration box they get rice, beans, lentils, some sardines and tuna,” said Allen. “That’s not enough to have a good nutritious meal and they get it weekly, so if they are in a camp where there is no fresh food or a body of water available then they are not getting those nutrients that they need.”

Beyond just informing the public on the refugee crisis, The International Institute of Wisconsin aids refugee families here in Milwaukee. They help with language lessons and have programs such as bus orientations, where the institute help refugees use public transportation and just familiarize themselves with the city. El Omari said she noticed a few similarities when working with refugee families.

“The hardest part is them trying to integrate into their new communities and try to learn these new cultural norms that are very different to them,” said El Omari.

I think people tend to dissociate from the refugee crisis because it’s a tough and perhaps an uncomfortable topic but having a refugee booth at the Wisconsin Folk Fair is just a simple reminder that Wisconsin is home to all of us.