Invasive or not, there are good uses for garlic mustard

Invasive or not, there are good uses for garlic mustard 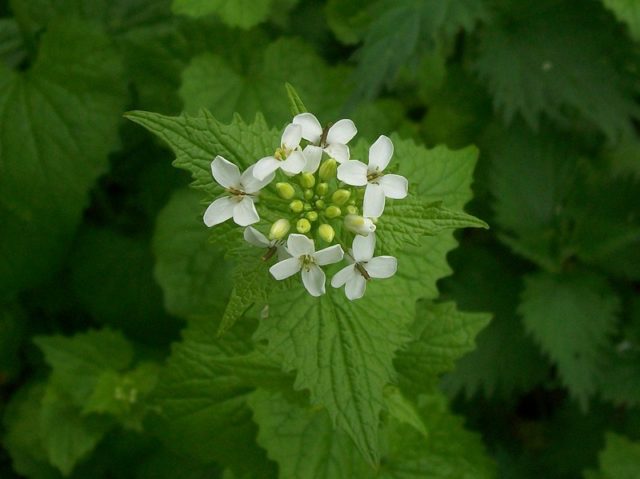 With spring comes new bugs, flowers… and garlic mustard. The plant is part of the brassica family along with kale, broccoli and collard greens. It’s called “garlic mustard” since it has a garlicky flavor to it.

Kyle Denton, owner of Tippecanoe Herbs located in Bay View, explains that garlic mustard thrives in Milwaukee, perhaps a little too much. It’s considered an invasive species by some as it tends to spread.

“It was first brought over to this area from people that were settling and looking to plant their crops that they like to grow from other parts of the world,” says Denton. “It really liked the soil here and the habitats so it’s been thriving here. It kind of escaped to the gardens, I guess you could say.”

But in the process of thriving, garlic mustard takes over the habitat of native plant species. Trillium — a three petaled flower —  not only fights for the same resources as garlic mustard, but deer also love to eat it, which contributes to its dwindling numbers.

“Like a good competitor, it also makes the ground a little bit more difficult for these native plants to propagate because it puts in some chemicals into the soil through its phytochemistry that make it less likely for other plants to propagate except for the garlic mustard,” says Kyle. “It’s kind of like when you’re in a race, and you put a banana peel and throw it over your shoulder, and somebody slips onto that kind of thing.”

While native plants struggle, Kyle says, it’s not entirely garlic mustard’s fault. Over the course of years, the soil has become less suited for native plants.

“I think it’s a generational thing. I think it goes back for many, many practices of soil management, since the Industrial Revolution perhaps,” says Kyle. “Moving forward it is wondering, ‘Why is it capable of thriving in this habitat and the native plants are not?’ That’s the question.”

Picking up excess garlic mustard is one way to combat its so-called invasiveness. There also can be a benefit to doing so — that is, if you eat it. Kyle says garlic mustard can help our bodies adjust to the spring and summer seasons.

Kyle says garlic mustard helps the lungs “move the mucus of the body and to aid and warm up the digestion and improve our metabolism which is a something that our bodies naturally tend towards in the springtime, as we hold on to things in the winter and we let go of things in the spring.

So if you find some garlic mustard in a friend’s yard and they’re thinking of throwing it away, try making a pesto out of it or cooking it with other greens. Kyle says to keep in mind that it’s tastier in the springtime. By summer it has been stressed out and takes on a bitter flavor. But at least it’s in abundance to enjoy.