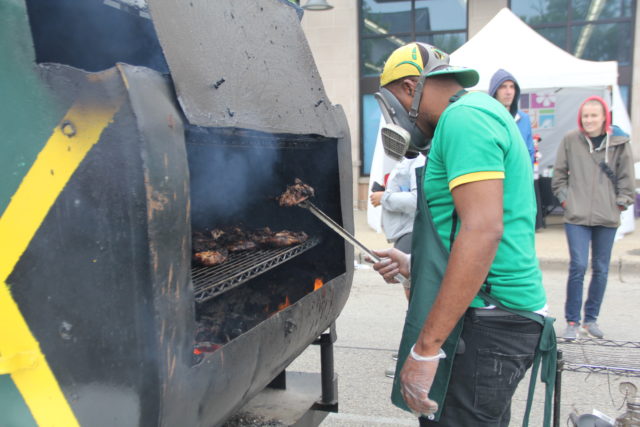 Juneteenth comes from the word combination of June and nineteenth and it’s a national holiday we all should celebrate.

This historical day matters because in 1865, Union Army soldiers arrived in Galveston, Texas with the news that all slaves were free. This is important to know since this day took place two and a half years after the emancipation proclamation.

Now, 148 years later, Juneteenth has become a national celebration honoring this victorious moment in our history that commemorates the end of slavery in the United States.

Every year, Milwaukee celebrates Juneteenth with one of the largest block parties in the city. Even though the weather was misty and cloudy at last week’s event, it didn’t stop the joyous spirit of the attendees. Thousands of people gathered together to celebrate, educate the community and to pay tribute to the past.

Troy Johnson, Vice President of the League of Martin, an organization of African American police officers, attended to join the celebration.

Having a good time at Milwaukee’s Juneteenth block party could mean different things depending on who you ask. It’s indulging in one of the many barbecue food vendors, meeting new people through the multiple information booths, and listening to the live performances.

To some, this day is a connection to one’s cultural roots. A reminder of their history and identity. A time for self-love, respect and dignity.

Kenia Mahdi, an attendee, was there for the cultural experience that isn’t present throughout the year and for being around people who look like her.

“It was about 10, 11 years ago when I got married when I start learning how to love myself and learning to love my culture,” said Mahdi.  “It feels kind of spiritual and grounded right now.”

Janice Tompkins, another attendee, says that Juneteenth is a reminder to invest in black communities.

“Milwaukee does not have a huge African American culture in regards to economic status,” said Tompkins.

This is a sentiment shared among many individuals I spoke with throughout the party.

“I would like to see the segregation disappear,” said Johnson.

“I would like to see more of our own money being rejuvenated into our community but in order for that to happen we do need more businesses here,” said Mahdi.

Juneteenth Day is not a holiday exclusive to just the black community. It’s a part of everyone’s history. Being in Milwaukee, one of the most racially polarized cities in America, means that we need to unite together to uplift communities.

“I like to see us support one another and love one another,” said Tompkins.

If you missed the Juneteenth block party, don’t panic. Just make sure to attend Bronzeville week and the Black Arts Fest MKE.