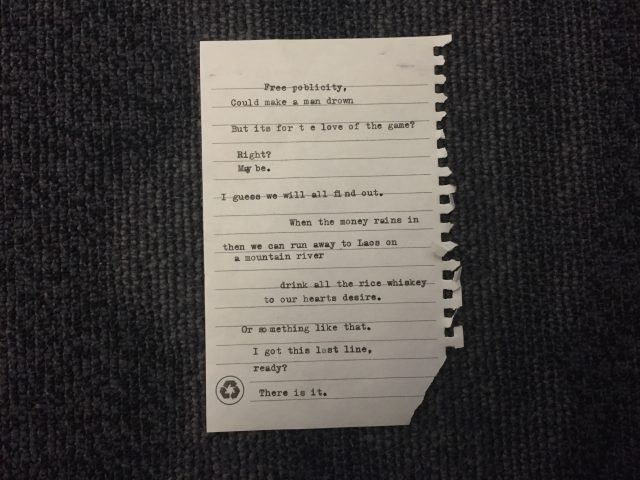 Fried food, beer, live music and… poetry? Last week I met Ian Lanphier, an “improv poet” outside the gates of Summerfest. As I was leaving the grounds I asked for a poem of my own and asked, “What’s a young poet doing outside of Summerfest?”

Check out the answers in the podcast player below:

Can you write me a poem?

It was last Wednesday, the opening night of Summerfest, and my stomach was full of beer and my ears were still ringing when I ran into Ian Lanphier and his typewriter,

“Well, I just sit out here, I’ve got my typewriter set up and I just write poems for anybody.”

Ian’s a young guy with an old typewriter and as the crowds slowly leave the gates of Summerfest at the end of the night, he’s there to give you one last memory to take home with you: your own poem.

But what’s a young poet doing on the street outside of Summerfest?

Ian, a Lyft driver in Milwaukee during the day, explains that poetry kind of fell into his lap when he first saw an “improv poet” in Madison. After receiving a less-than impressive poem, he decided to give it a go to see if he could do better.

And after his typewriter-debut at Locust Street Fest and after getting some advice from well-known typist, Anja Notanja, he’s now trying it out at Summerfest,

“I’ll just get in my head on the typewriter and I’ll just drown out everything that’s going on around me.”

As I approached his typewriter that Wednesday and asked for my own poem, after a few minutes of listening to the “click-clack-click” of his typewriter, Ian presented me with this final poem:

But it’s for the love of the game, right? Maybe.

I guess we’ll all find out

When the money rains in,

then we can run away to Laos on a mountain river

Drink all the rice whiskey to our hearts desire…. or something like that.

I got this last line, ready?

…Not bad! Want your own poem from Ian? No promises, but if you’re lucky you might catch him, like I did, outside of the North Gates at Summerfest.

Check out my full piece on Ian Lanphier and his typewriter by clicking the podcast player above. To check out more of our Summerfest coverage as well as another piece from outside the gates of Summerfest, visit radiomilwaukee.wpengine.com/discover-music/