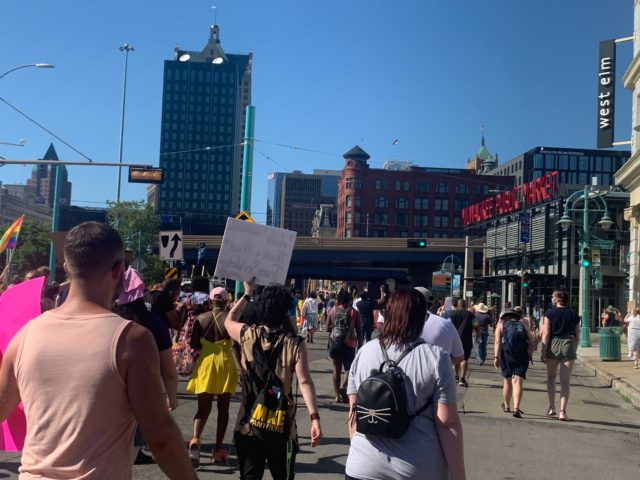 For the second year in a row in Milwaukee, activists from the LGBTQ+ community — and their allies — flooded the streets in Walker’s Point for the March with Pride event Sunday.

The march was organized by a small and dedicated team, led by Montell Infiniti Ross, and drew hundreds of people to the main gates of Summerfest for a rousing rally. After several speakers addressed the crowd, the group then stepped off along the two-mile march route, winding through Walker’s Point, the Third Ward and downtown Milwaukee.

In addition to the usual calls for justice and calls for police reform, the activists also trumpeted an additional, more focused message from the LGBTQ+ community: trans lives matter, women’s lives matter and all Black lives matter.

Ross, speaking from atop a parked car, called for “systemic change.”

“Change has to now move to the next level of systemic change. That means showing up in uncomfortable situations to create change,” Ross says.

“The ultimate goal is to see systemic change actually be in effect, and really Black and Brown and marginalized populations can feel the change. Right now we talk about the change, but when we can feel it, that’s when we know that we’ve actually done a movement,” Ross adds.

The demonstration ran along the same route as the Pride parade, which was canceled for the second year in a row, and it stopped at multiple intersections to introduce additional speakers, lead chanting and give protesters a chance to grab water and snacks from volunteers. It ended in Juneau Park where attendees were invited to a free drag show and community resource fair.

Trained, uniformed observers from the ALCU were on hand, as well as an array of volunteer medical personnel and marshals. Pace cars protected protesters at the back and front of the crowd, while volunteers helped block traffic on surrounding streets. The demonstration was carried out without violence or disruption.

88Nine was on site and spoke with organizers and to protesters along the march. Listen to the audio player below to hear from Ross and Elle Halo, a prominent Black transgender activist who worked on the organizing team, on what “systemic change” means to them.