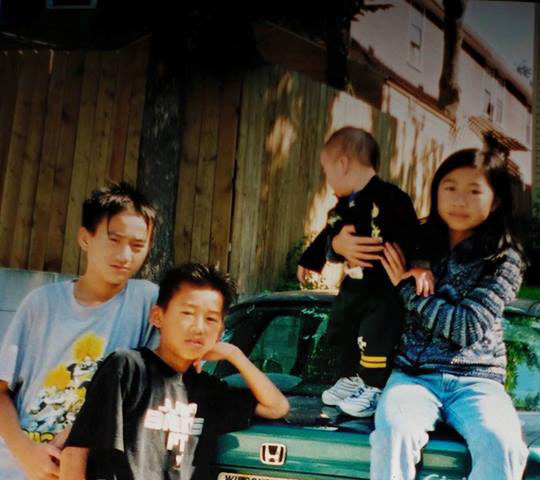 Originally from the mountains of Laos and Thailand, the Hmong people came to the United States in the mid-’70s as political refugees. Roughly more than 130,000 refugees settled in the States after being sponsored from schools and churches.

Milwaukee hosts the fourth largest Hmong population in America.
E Her Vang is one the city’s many second generation Hmong Americans. After I was warmly welcomed into her home, we had a conversation about what it means to be Hmong and maintaining her identity.

Her Vang was born in Fresno, Calif., and lived there until she was four. She remembers her cousins raising pigeons in their garage.

“We went back a couple years ago because my grandma passed and they still raise pigeons in their backyard,” said Her Vang.

Before Her Vang went to UW-Madison for undergrad, she was transferred to Franklin High School from an MPS school. That was when she began to feel that she was different from other kids.

“That was kind of a culture shock because when I was in MPS it was a lot more diverse so I felt more comfortable,” said Her Vang. “When I went to a suburban school it was kind of like, ‘Oh you’re kind of in a lower class and everyone seems ahead.’ You start wanting the same things that you’re surrounded by, so it was kind of difficult for my mother to balance that, too, because I wanted to wear what the kids in that school were wearing and we couldn’t really afford that.”

Her Vang said she recalled that other kids confused her ethnicity and didn’t understand what being Hmong was. She constantly faced questions such as “Where are you really from?” throughout her childhood. Although she may have unaccepted, her family always prided themselves on being Hmong.

When Her Vang’s mother was growing up, within Hmong culture women were supposed to prioritize a domestic role and education wasn’t valued. Although this mindset isn’t as common now, Her Vang’s mother always championed getting an education.

“My parents may feel like it may be too late for them,” said Her Vang. “They were pushing us to do better in this country so that we would have a better life but they would always tell us that we were Hmong and proud of that.”

One Hmong tradition is clan names. In Hmong society there are roughly 18 clan names that trace back to each family’s earliest ancestors. In the case of E Her Vang, her maiden name is Her and Vang is her husband’s last name.

Beyond Her Vang’s appreciation for Hmong tradition and food, Her Vang says family ties and closeness to her community is the heart and honor within Hmong culture. Home are those who around you.

“If I went to a different state and there was a Hmong family there and I don’t really know who they are and I’m like ‘I’m Hmong, these are my parents’, then they will just welcome me in their house and feed me and find a place for me to sleep,” said Her Vang. “So that hospitality thing is really great in our culture.”

Hmong Americans are the largest Asian ethnic group in Wisconsin and although it is nearly impossible to highlight everything about what it truly means to be Hmong, Her Vang’s story is just one of the many perspectives on living in Milwaukee as a second generation Hmong American.