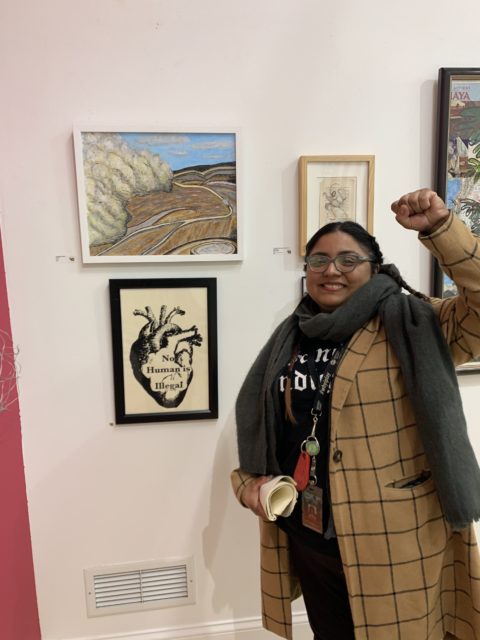 Many artists use their craft to address social change. Sometimes their work is a form of criticism, other times it can be a means to challenge mindsets.

Public Allies is a national organization committed to advancing social justice by activating leadership in youth. This past month, Public Allies alongside LIT MKE and Walker’s Point Center for the Arts invited people in Milwaukee to view local art and learn how Public Allies supports progressive change through the arts. Ashley Lee says the exhibit “#MKE Movement Art” showcased the role of Milwaukee creatives in social and political movements.

“Our central issue is that communities don’t have a voice in the decisions that are made about them,” said Lee. “I think you can apply that to most communities in our city.”

The exhibit was filled with different narratives from the perspective of black and brown artists in Milwaukee. Featured artists highlighted immigration reform, keeping families together and reproductive rights. Jeanette Arellano, one of the alumni artists and activist said the exhibit was meant to capture emotion but also to bring light to issues communities deal with on a local and national scale.

Marcela Garcia, executive director of the Walker’s Point Center for the Arts, said having art made by our local community allows spaces to be accessible.

“Everyone has the ability to contribute something positive to the conversation in the direction that our country is going or shouldn’t be going,” said Garcia. “Art is a medium that allows us to extend those conversations.”

#MKE Movement Art opened on Jan. 17, a night where there was a big snowstorm but yet there were over 300 folks at the gallery for opening night. I think that shows that there’s a need and desire to see art reflected by the people who make up our city.