‘Magnificent Machines of Milwaukee’ honors Milwaukee engineers and their inventions

‘Magnificent Machines of Milwaukee’ honors Milwaukee engineers and their inventions 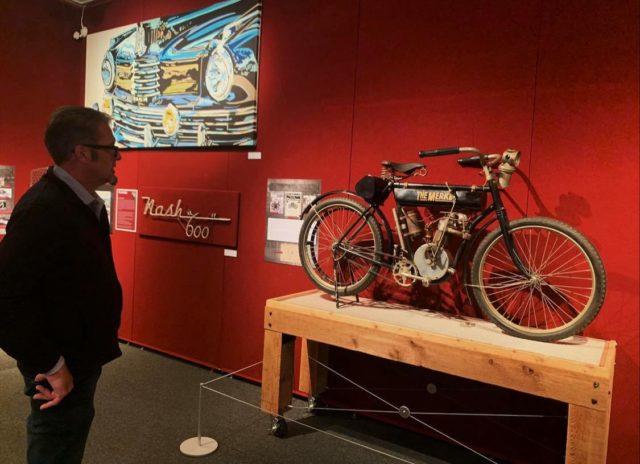 The project started two years ago when Ferhing approached James Kieselburg, director of the Grohmann Museum, to look at the book. Roughly five months after the book release they decided to create an exhibit featuring some of the machines.

This is where the fun began. They both embarked a mission compiling machines to fit the gallery and even went as far as New Jersey to find the right invention.

“Six months then, it’s really been compiling all these,” said Kieselburg. “Getting them all in space, interpreting them, writing label copy, writing text panels for interpretation in the gallery and really just bringing it to life.”

The exhibit displays a variety of inventions and included the original machine for individuals to see the magic firsthand.

“We have Ole Evinrude’s first outboard motor from 1909,” said Kieselburg.  “We have the original Sholes and Glidden written typewriter, the one first made by Remington in 1874, we have the Milwaukee Merkel, a motorcycle from 1905.”

Kieselburg’s favorite item is the Milwaukee Merkel, which can be sited to be one of the rarest motorcycles known due to being one of the only two fully intact Merkels left.

One of the greatest inventions that’s featured is the indoor temperature control innovation from Johnson Controls.

Kieselburg says he hopes the gallery inspires a sense of awe and wonder when looking at the exhibit.

“A surprise like, ‘This really happened in Milwaukee? These things were invented here?'” said Kieselburg. “Like the typewriter, for instance, I don’t know that everybody knows that, the typewriter as we know it today they were invented in Milwaukee on, four blocks from the museum here. It was revolutionary, that had a global impact. For one machine made in Milwaukee, it had a ripple effect was just amazing.”

Milwaukee has always had a rich industrial history, however, with our day to day activities and how everything is essentially digital, it’s easy to become distant from that moment of history. The exhibit is a reminder of all that we did and also creating a sense of pride in our city and the engineers who impacted our lives.

You can visit the exhibit at the Grohmann Museum, 1000 N. Broadway, through Dec. 22.