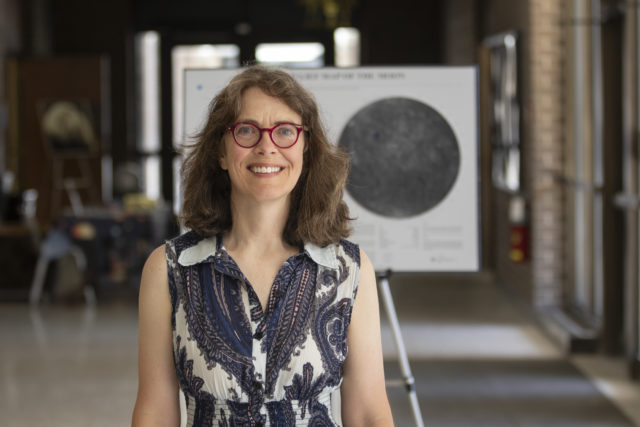 When I asked Jean Creighton, director of the Manfred Olson Planetarium,  what sparked her passion, inquisitiveness and love for astronomy, she recalled a memory that was passed down from her mother.

“I think I’ve always been interested in astronomy,” said Creighton. “So my mom says that when we were walking down the street, when I was five, I looked up and I said, ‘Mommy how are stars born?’”

The Manfred Olson Planetarium might be considered a hidden gem that’s tucked away within the UW-Milwaukee campus. The planetarium hosts five major productions every year. This fall semester, they are kicking it with “Creepy Cosmos,” starting Sept. 27.

The spooky production is described as combing the fun of Halloween with the intrigue of astronomy that intends to energize your sixth sense.

“We are using different rooms of the house as portals to check out intriguing, dangerous, weird astronomical things,” said Creighton.

One thing that’s special and separates the Manfred Olson Planetarium from another planetarium is the staff’s passion to connect the lines between science and culture.

“Every year at least we have one major production that has an emphasis on culture,” said Creighton. “For example, ‘Arabian Nights’ was our program in the spring and its emphasis was the contributions of the Arab people to astronomy but also to understand something more about their culture.”

Another production was “Indigenous Voices,” which celebrated Native peoples of Wisconsin and currently, the planetarium is in the works of creating an upcoming program called “Under African Skies.”

A planetarium is an access point that allows you to see the night sky and ponder about the unknown. I had to ask Creighton why she thinks there is a fascination around planetariums?

“I think for many people it’s their entry point in astronomy,” said Creighton. “Even if they don’t become Astronomers, and most people won’t, it can ignite a lifelong interest in how the cosmos work, what the sky is like. That can enhance every summer vacation you ever take again.”

Planetariums open a door to the entire universe and allow you to be a kid again. It’s exciting to simply look up and immerse yourself in the great unknown and explore the solar system. A sweet perk is that you never even leave your seat.

You can enjoy the upcoming production “Creepy Cosmos” every Friday from Sept. 27 through Oct. 25 at the Manfred Olson Planetarium.