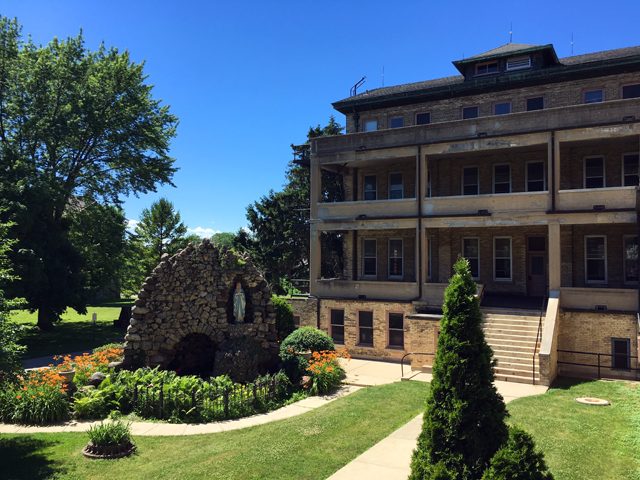 A sprawling building on the South Shore is vacant today, but for decades, it operated as St. Mary’s Academy and the Marian Center for Nonprofits, run by the Sisters of St. Francis of Assisi.  OnMilwaukee’s Bobby Tanzilo went inside, and he joined me in studio to talk about his visit.  Listen below.

The former Marian Center for Nonprofits has all the telltale feature of a 1930s school — a beautifully appointed auditorium, a gymnasium, science labs, and transom lights above its classroom doors — but it hasn’t been a school for decades.

The building sits on the line between St. Francis and Milwaukee and was converted from school to office space in the early 1990s.  Nonprofit organizations and artists were allowed to rent low cost space there, but as of July 1, it closed for financial reasons.

Prior to the Marian Center, the space was home to St. Mary’s Academy, an all-girls school that operated alongside Thomas Moore High School when it was an all-boys school.  The site was also the birthplace of Cardinal Stritch University, formerly known as St. Clare College, in the 1940s.

Today, everything is still there — except for the renters.

It’s unclear what will happen next with the now vacant space, but Bobby said he got the impression from officials that the building will not likely be demolished.

Listen to our conversation above, and be sure to read his complete story at OnMilwaukee.com.