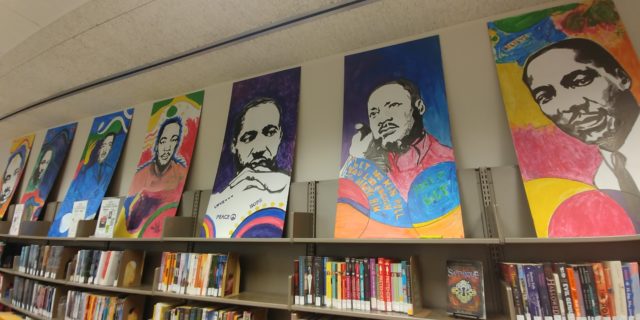 Dr. Martin Luther King Jr. would be turning 89 this year. While some people relish in having a day off from work or school, for many communities of color, it is a day on.

Listen below to hear how the MLK Library celebrated Dr. King’s birthday.

Portraits of Dr. Martin Luther King Jr. at the MLK branch of the Milwaukee Public Library.

Dr. King’s message and legacy is one that resonates with just about everyone. As a Latina, I admire his work with Cesar Chavez. I idolize photos of Dr. King delivering speeches in Puerto Rico. I appreciate his powerful voice speaking on behalf of the Latino community in America to give us the same rights he sought for African-Americans.

He worked with other major historical figures such as Rosa Parks and former President John F. Kennedy. He devoted his life to fighting for basic freedoms and liberties to be shared by all people of color. He was peaceful and spoke from a position of strength, regardless of the hate that was spewed in his direction.

In honor of his legacy and birthday, the Milwaukee Pubic Library’s MLK branch on Locust Street spent the entirety of his birthday celebrating his work.

Flocks of community members gathered together, from infant, toddler and pre-teens to adults and senior citizens. People of all colors and socioeconomic backgrounds gleamed with pride at the ability to recognize Dr. King under the same roof.

The celebration was one full of education and artistry.

Stations around the library taught children and adults alike about voter rights. Adults were able to register to vote while children received “Future Voter” stickers.

Kavon Cortez-Jones delivered three funny, relatable and inspirational poems honoring the city of Milwaukee and the shared experiences of growing up in North Side communities.

Dr. King’s birthday celebration was a praise of Milwaukee, a unification of humanity and an honoring of a man who paved the way for all of us to be in a room together, regardless of our differences.