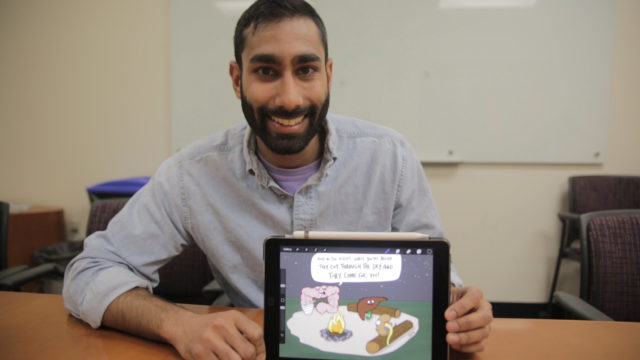 The process to becoming a doctor is daunting. Years of schooling, residency and sacrifices are required. Luckily, we have brave individuals who are passionate about following this path, like Medical College of Wisconsin student Rushi Patel.

Rushi was diagnosed with attention deficit hyperactivity disorder (ADHD) and dyslexia late in the game, as in, during his first year of medical school.

Listen to the audio interview below to hear the creative method Rushi is using to succeed in medical school.

After his diagnosis, a lot of things began to fall into place for Rushi. He remembered his early days in school when he would mistake the letter m and n. He recalled constantly zoning out and having trouble reading. The diagnosis all began to make sense to him.

One thing he also remembered about his youth was his love for comic books and drawing. This would prove to save his studies.

One day, frustrated with trying to learn about cranial nerves and brain anatomy, Rushi stopped trying to memorize huge words and tried drawing it out. He drew skulls, eyeballs and made animated comics for the parts of the brain he was struggling to learn.

This was a game changer.

His illustrations made it much easier for him to remember anatomical terms and functions. He was able to take exams and think back to his drawings to recall the information. When his study buddies got ahold of those drawings, they began to use them to study as well.