Get to know the buskers of Summerfest

Get to know the buskers of Summerfest 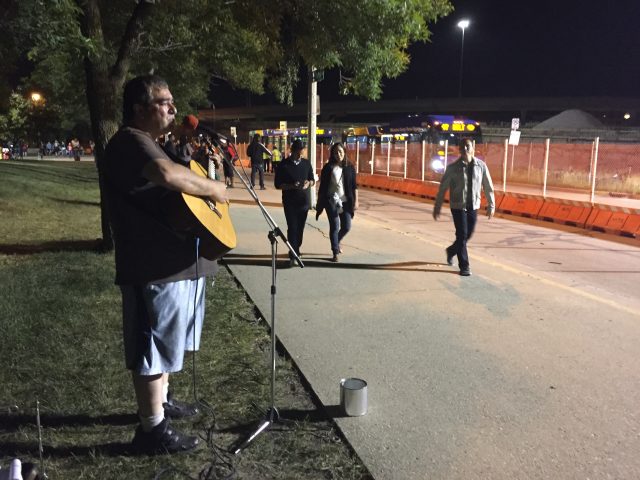 There’s no question about it: when it comes to music festivals in Milwaukee, Summerfest is it. But at the end of the night, once the big names have left the stages and you make your way towards the parking lots and the shuttles, you’ll come across a whole different breed of musicians: buskers.

I hit the streets to chat with these talented street musicians and asked, “What makes busking different than being on stage?”

The street audience is the most honest audience... you get a lot of positive vibes and a lot of emotion.

It’s a Wednesday night and as Summerfest is letting out and as I leave the gates and say goodbye to my friends, the air continues to be filled with music.

David Goeghe plays his keyboard outside of Summerfest

David Goege sits at his keyboard and plays a beautiful ballad as the swarms of people walk past; only asking for a pair of ears, and, if you’re feeling generous, a mere dollar or two.

He, along with many of the other buskers outside of Summerfest have been there year after year playing music for the crowds. But, why? What is it about street music that keeps these buskers coming back?

Shawn and the Soul Drummers

One of the buskers at Summerfest this year is Shawn: he and his five friends sit on buckets and beat catchy rhythms, calling themselves the “Soul Drummers.” Traveling all around the country playing outside of festivals, Shawn explains that the energy of street music is irreplaceable,

“[My favorite part about busking] is the people. They dance and they love it, you know? We make them happy.”

Just watching these Summerfest attendees walk past various buskers, you can see the music directly affecting their body language.

I see a man reaches for his wife’s hand as David Goeghe plays beautiful ballads from his keyboard; a woman’s head bobs up and down as Dale Montez sings alongside his acoustic guitar; a group of teenagers dance alongside Shawn and his friends.

Dale Montez plays outside of the North Gate

And at the end of the day, sure, these buskers may never play the Marcus Amphitheater, but for them that’s OK. They do it for the love of music, the love of the crowd.

So next time you walk past a busker? Don’t be afraid to nod your head to the beat or tap your toes to the music….  and, hey, a buck or two I’m sure wouldn’t hurt either.

For more of our Summerfest 2016 coverage as well as another story from outside of the Summerfest gates, check out radiomilwaukee.wpengine.com/discover-music/.