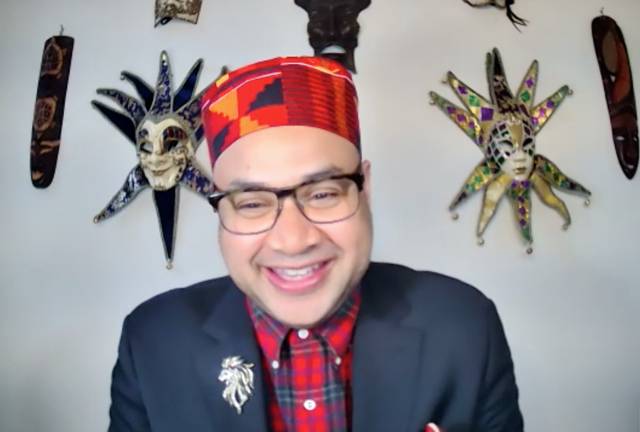 “Coming from a Caribbean background it was really instilled in me that whatever you do, do it with grace, with hard work and try to be the best at whatever you do,” says Milwaukee Repertory Theater’s Associate Artistic Producer Rajendra Maharaj. “Those kinds of values were instilled in me along with my imagination and faith in God. That really shaped me as a storyteller.”

Rajendra is the first person of color to hold this position for the Milwaukee Repertory Theater. He says he got his love of theater and culture from his parents as a child.

“I come from a West Indian background,” says Rajendra. “My father is Trinidadian and Indian. My mother is Haitian Bahamian. All those cultures celebrate ritual. They celebrate humanity through dance and song. Even going to church on Sundays, seeing the ritual of going to mass was always quite theatrical.”

Rajendra believes in theater as a tool for activism and change. Rajendra says that theater has seen a movement calling for Black and Brown artists to be visible and invited to the stage.

“The American theater for a long time has not been democratic,” says Rajendra. “It has celebrated and used artists of color but when you look at organizations that still have not a single person of color on staff or on their board, that’s problematic in 2021. One of the reasons I came from New York City and the New York theater community to be here and be part of the staff is because of the work that Milwaukee Rep has been doing for years in terms of inclusion, diversity and parity.”

As a professional thespian, Rajendra has worked both on and off-Broadway in New York and for top regional theaters across the country. He’s a director, producer and playwright. He’s written a play about Lorraine Hansberry’s life and the Little Rock Nine. He brings his love of activism to his work. For those getting started in theater, Rajendra says to keep in mind that art is always waiting to be produced.

“We know from the days of slavery and the Holocaust, Native American removal and the worst of human travesties that there was always art happening,” says Rajendra. “Art to documented, art to uplift, art to inspire, art to put a spotlight on the ills and the strengths of our society. I would encourage any artists to find first your tribe. That can be in your living room doing zoom readings. That can be as big as Milwaukee Rep or as small as you want it to be. Find your tribe and then find what you want to say about the world.”