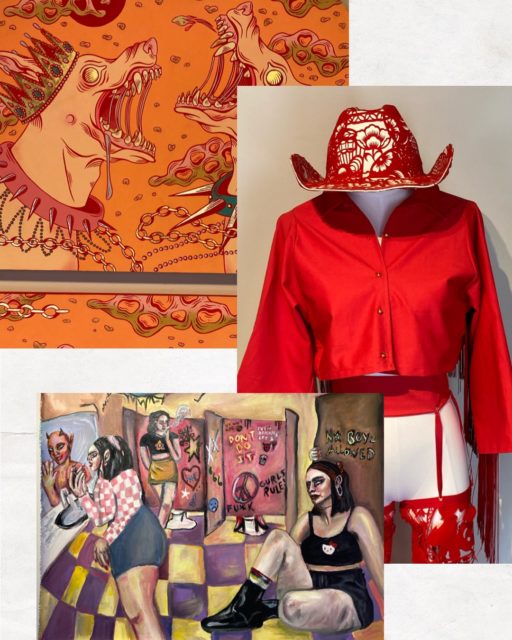 The term “struggling artist” was first introduced to me when I was in high school, flirting with the idea of venturing into a creative field. I, like many of my high school classmates, was told that in order to become an artist, you inevitability will struggle before you succeed. That’s if you’re one of the lucky ones.

These days with the power of social media and online stores like Etsy, you can promote your work to a large-scale audience and turn a passion into a living. However, does accessibility translate to gallery spaces? Bridge Work-Milwaukee, generated by Plum Blossom Initiative and Var Gallery and Studios, aims to address this need by bridging the gap between Madison and Milwaukee art communities to support local artists. Every year featured artists receive artist-in-residence benefits, a free studio space, other perks and an exhibit featuring their work at Var Gallery. This year’s exhibit is Harmony / Dissonance.

An explosion of colors, that’s what you will see when you look at Helena Baka’s work. Her abstract paintings are a mix of acrylic and oil paint to cover themes of innocence, naivety and grief all translated through color. As a first-generation American to Albanian immigrant parents, her work reflects her culture, girlhood and complicated impact on her identity. One of her pieces takes a closer look at bathrooms as safe spaces.

“I’m just thinking about how public bathrooms can be a safe space for girls and a place where we can unwind,” said Baka. “I think about how when I’m with my friends, we’ll be like, ‘Can you go the bathroom with me?’ and I was thinking a lot about the punk scene too, and just how all the graffiti in bathrooms can be silly but interesting and its own art in itself.”

Building stories through line and color is what Lindsey Yeager knows best. Yeager is a fine artist and illustrator from Madison, and upon looking at their work, it’s whimsical. The canvas has bright colors like red and orange with a field of animals like rabbits and lambs running around but if you take a closer it’s a deadly reflection. The skies are hot fire, clouds of fog and the rabbits are fleeing. Yeager’s work is about greed.

“I wanted to talk about essentially this idea of what happens when human beings, especially greedy ones, get their hands on a perfectly good world, and then it just like inevitably falls apart,” said Yeager.

The word “divided” sums up the feeling that Anna Siemsen brings out of you when you look at her collection. Siemsen’s work is heavily influenced by her heritage, having grown up as a Chinese adoptee, and living in a biracial family, she has spent years feeling torn between two cultures. To her, it made sense to use her upbringing as a source of inspiration showcasing Western and Chinese-influenced garments.

“I thought a lot about like typical Western wear,” said Siemsen. “Looking at like Western TV shows and like popular culture from the 1950s but I also combined it with aspects of Chinese culture. The pants are made out of paper cutouts that are used for the Chinese new year celebration. The hat is also made out of the same cutouts. The outfit is all red because in China, red is the luckiest color.”