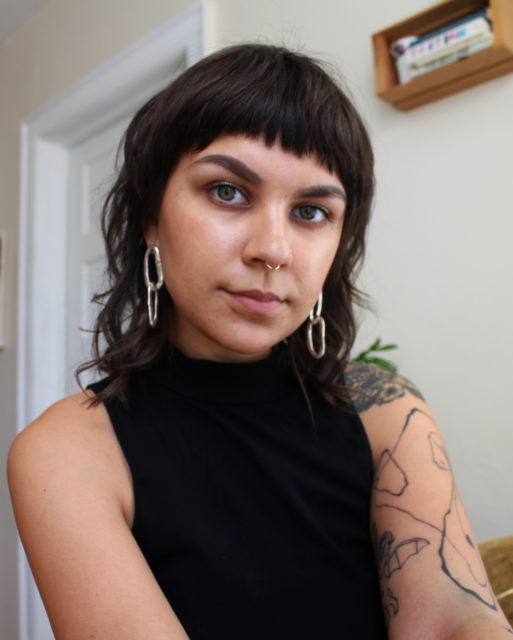 Melissa Mursch-Rodriguez is the creator of Moody the Zine, a zine that showcases art, photography, poetry and writings from queer and BIPOC (Black, indigenous and people of color) artists.

“I discovered zines in college and I quickly fell in love with them,” says Melissa. “I got really into riot grrrl, the movement, and thinking about zines as this form of protest of spreading social justice messages.”

Melissa tries to ensure that queer and BIPOC people are represented in the zine as part of her exploration artistically as a mixed Chicana queer woman. Melissa explores colorism, class, gender roles and sexual taboos in her work. The zine is no exception.

“When it comes to curating, I don’t so much like promoting my own art,” says Melissa. “Really my mission is to platform others and form community. I try to find creatives who maybe haven’t been featured in a show, who are up and coming or just a little bit less known in the community of Milwaukee.”

Melissa has spent time working with the community as part of her art practice. She is an admissions counselor at the Milwaukee Institute of Art and Design and she’s managed the University of Wisconsin-Milwaukee studio arts and craft center. Melissa says in her time teaching art she’s come to appreciate art as a part of community building.

“I it made me realize how much people are afraid of art,” says Melissa. “They’re so afraid of failing and messing it up. So it made me want to be able to spread art and make it more accessible.”

Moody is an extension of that love of community art. It also incorporates her love of writing and embroidery.

Before Melissa started making the zine she created fiber art and studied the practice through her time in college.

“I really fell in love with the history of it,” says Melissa. “The history of it being women’s work and not really fine art and just a craft — really lends itself to add that extra layer to any piece you make with it. A lot of my work has to do with my identities, one of which being a woman.”

Melissa also found that she enjoys writing poetry and journaling. Melissa would often incorporate writing into her embroidery. The zine isn’t too far off from Melissa’s art practices of writing, community and fiber arts. She integrates a bit of it all in the zine making process.

“The first issue was overwhelming because I decided I wanted to print it all myself,” says Melissa. “I thought that would save me some money. I borrowed a friend’s printer. I did it all in my little apartment, which is tiny. So that was overwhelming. But now The Bindery is printing my issues. They kind of take care of all the printing. They fold it and then I do sewing of the binding on it, which is fun to do.”

The zine has seen submissions not just from Milwaukeeans but from people in other states and countries.

You can submit to Moody or subscribe with both digital and print options. There are three-month and six-month subscriptions to choose from if you’re going the print route.

There’s also playlists Melissa made to enjoy with your reading.

Copywrite Magazine, in partnership with FemFest, is holding space for people to create their own covers of the women, nonbinary and femme-identifying artists that have inspired them. You can submit videos to Copywrite Magazine where they will be shared on the website. If you’re not up for singing you can also submit artwork.