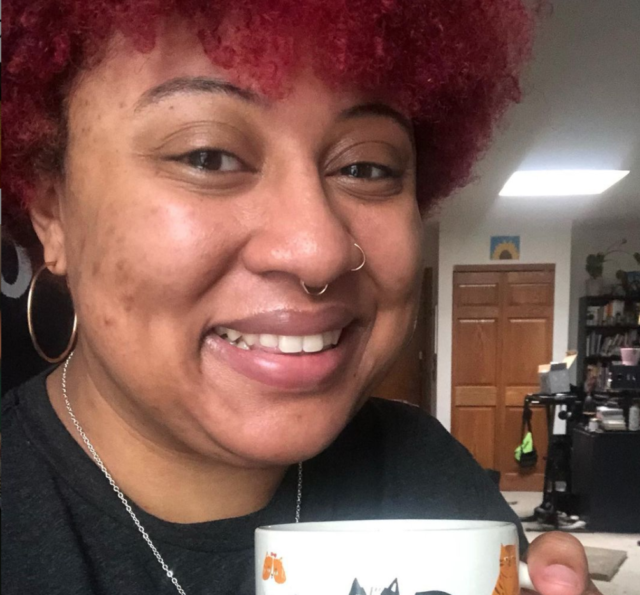 Mikey Cody Apollo is a poet, a storyteller and a self-proclaimed bi-con (bisexual icon). She’s also sex positive. That’s because growing up she was encouraged to ask questions and talk about sex.

“Without influence from my parents or church or whatever it was like, ‘Maybe I won’t have sex until I’m married,’” says Mikey. “Clearly, I was like the outlier in my friend group who felt that way. But it was just so interesting how we all navigate, particularly Black and queer folks, conversations around sex.”

Sex-positivity shows up in Mikey’s work along with her identity as a queer Black woman. Mikey has written and published a book of her own poetry called “Black Girls, Silence, And Other Things Made of Gold.” She’s got a lot of interest in her book from the Milwaukeeans, friends and from people in other states.

“There’s over 1000 copies out in the world,” says Mikey. “Honestly, I get weird and emotional talking about it every time because it’s weird when you were the kid who bought quarter notebooks in second grade. Now you actually are doing the stuff you said you were gonna do when you were eight. It feels unreal every time.”

Crafting her writing began for Mikey when she attended Milwaukee Public Schools. She attended Roosevelt Middle School of the Arts and Milwaukee High School of the Arts. It wasn’t until she started attending slam poetry workshops at Dasha Kelly Hamilton’s The Retreat that art seemed like a path she could take professionally. What she loved about Hamilton’s workshop was how much intention Hamilton put in to nurturing the voices of those in attendance.

“I think by finding my own voice in that environment, it was easier to then share some of those like scars or like other parts of myself that are either embarrassing or just difficult to talk about,” says Mikey.

In addition to working on the craft of poetry Mikey is working on a film that centers the experiences of a young Black boy from Sherman Park. The film won’t come out for another year so we’ll have to wait to see her newer projects but you can catch some of her art on Instagram.

Know any rad women and femme-identifying artists? Are you one yourself? CopyWrite Magazine, in partnership with Riverwest FemFest, is holding space for people to record covers of the women, nonbinary and femme-identifying artists who have inspired them. You can submit videos to Copywrite Magazine, where they will be shared on the website. If you’re not up for singing you can also submit artwork.