Milwaukee Habitat will help over 200 families in the Harambee neighborhood

Milwaukee Habitat will help over 200 families in the Harambee neighborhood 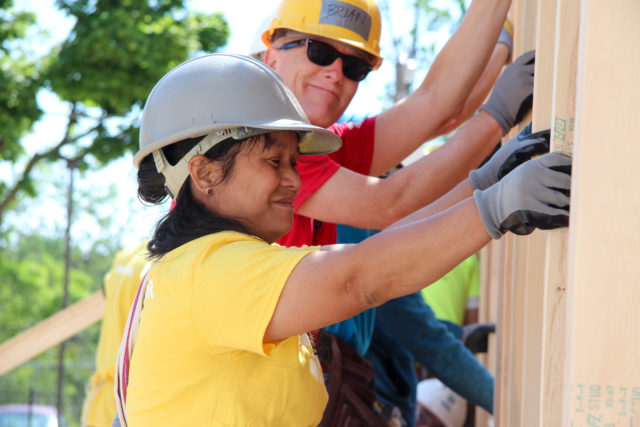 Within the Milwaukee area, one in three Milwaukee families who are renting spend over 50% of their total income on housing alone. According to data, residents living in Harambee, the median household income is roughly $20,000. The average price point for a small one-bedroom apartment is around $850, at it’s lowest.

“Fifty percent is unacceptable because now you have a decision, ‘Am I going to pay for my medicine this month or eat healthily or invest in my child’s education or am I going to pay the landlord?,’” said Brian Sonderman, executive director of Milwaukee Habitat.

Milwaukee Habitat, a non-profit that helps families in need of safe and affordable housing, is on a mission to change that staggering statistic. This year it is focusing on the Harambee neighborhood.

Let’s break down what this entails. With an initial grant of $1 million dollars provided by Bader Philanthropies, Milwaukee Habitat will be putting in place 40 new homes and repairing an additional 20 homes in Harambee. In the next four years, this project will help more than 200 families access safe and affordable housing.

Sonderman says this is an expansion of Habitat’s Neighborhood revitalization strategy, focusing on certain blocks that contribute to a lasting communal impact.

“As homes are preserved and new are built that really brings stability to a block,” said Sonderman. “We’ve seen some amazing outcomes in previous works that really leads to not just a visible transformation but a ripple effect on so many different levels.”

Some of the changes that were impacted by past revitalization strategies throughout the Washington Park neighborhood were reduced crime by 46 percent, improvement in health and higher graduation rates. Daniel Bader, CEO of Bader Philanthropies, says their main priority is the families.

Sonderman said although there are many neighborhoods within the city that face the same challenges, the decision to focus within Northern Harambee were the residents.

“I think the thing that Harambee has that we really look for are residents who really want to come together to put together a plan to help transform their neighborhood holistically,” said Sonderman. “There are resident leaders who are ready to step up and that’s true for Harambee.”

The term Harambee comes from Swahili translation for “pulling together” and that perfectly describes the neighborhood. Harambee residents actively pursuing change and working together to create a safer place to live.