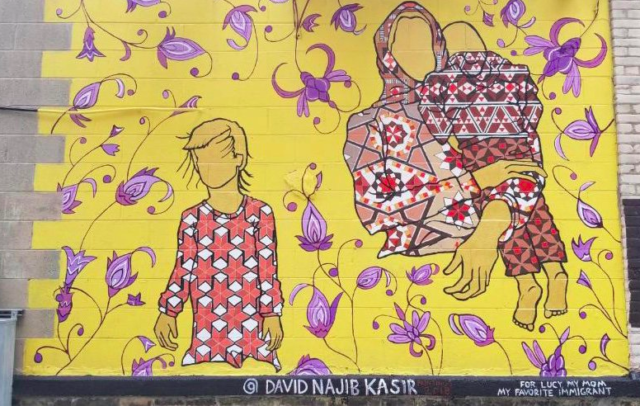 Murals are one way the public can access art. If we take a look at Milwaukee’s Black Cat Alley, we can see that it transformed the outdoors into an art gallery.  In that alley, there’s one mural with a big yellow backdrop, framed with purple flowers surrounding a faceless figure of a mother with her children dressed in geometric designs. The figures symbolize a Syrian family who has recently become refugees.

So who is this Milwaukee artist and what inspired the mural?

David Najib Kasir is a Milwaukee-based artist. His mother is Syrian and his father is Iraqi. When he was younger he lived in Syria and recalled going back for a few summers. His current work deals with the refugee crisis and the Syrian civil war. Kasir says his art is a reflection of his life, in order to be genuine to both himself and the viewer.

If you take the time to look at his detailed artwork, the mosaic patterns stand out. These designs are everywhere throughout the Middle East. The patterns are known as zellige. You will find similar patterns on instruments, furniture and jewelry boxes. Yet the designs are intended for more than just a visual way to represent a culture, Kasir says it also symbolizes the transition of cultural assimilation.

“I had them wearing these patterns that is a representation of a culture that they belong to,” said Kasir. “As they go into their new environment as refugees, those designs that’s sort of a metaphor as where they come from, what they bring with them. But, realistically as some of these children or infants grow up in their new environment, that would be chipped away. They would lose that culture.”

Another interesting aspect of his work is that all the painted figures are faceless. This creative choice is to allow the viewers to relate.

“I wanted people to look at these pieces and think as they look at the mother or child, I wanted them to see themselves in those figures,” said Kasir. “Somebody could look at it and say my mother loves me the way that figure loves her child.”

One of the great things about murals is that it lives in harmony with the space and neighborhood it’s displayed at. They are reflections of the people who live there. David Najib Kasir’s mural, from the series Missing Subtractions,  is just one of the many stories that represent our city and that representation means something. Check out Kasir’s work at the Black Cat Alley, as well as Var Gallery and 5 Points Art Gallery.