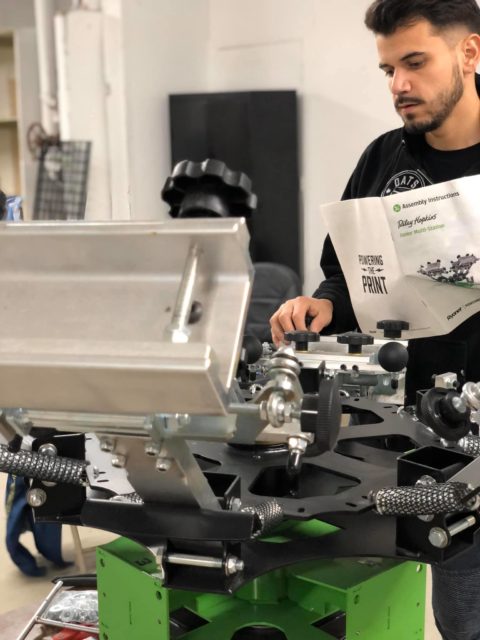 When I first heard of Milwaukee OATS, a local screen printing shop, I thought of grains. To my surprise, the name has no connection to hearty cereal. Instead it’s an acronym for “Only a T-Shirt.”

Enrique Murguia, the owner of OATS, never saw himself as a screen printer. When he was a kid he struggled connecting with people but found a way to express himself by creating urban art.

“Growing up learning English and Spanish, my communication skills weren’t the best,” said Murguia. “Art allowed me to connect with different communities and to break the barrier.”

Another passion for Murguia was politics. In high school, he tried experimenting with art to bring light to local issues. Nothing clicked, however, until he saw the work of Shepard Fairey. Fairey is a street artist and founder of OBEY Clothing, notably known for the “Hope” poster of Barack Obama for the 2008 presidential campaign.

When he was enrolled at Stevens Point University, he created shirts for his friend group from videos on YouTube and mentorship through Bay Tex Inc. After attracting a small clientele on campus, OATS was created.

“Even though we were providing a product, a product that meant so much to somebody, at the end of the day it was only a T-shirt,” said Murguia.

OATS has worked with organizations like Urban Underground, Youth Justice Milwaukee and the Wisconsin Department of Children and Families. Beyond creating merchandise for organizations, OATS works with individuals creating their own brands and movements. Murguia says Milwaukee is creating its own entrepreneurship ecosystem.

“I know if I can help one young person, that young person is going to go into the community and help ten other people,” said Murguia.

Currently, OATS is opening an internship to teach the art of screen printing and the process of building your business.