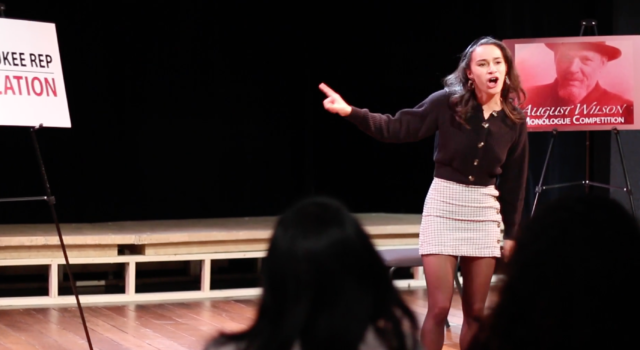 If you’re up on the most popular films streaming right now or you have listened to Cinebuds lately you might have heard of the movie “Ma Rainey’s Black Bottom.” Well, August Wilson penned the play became that movie.

Wilson was a prolific playwright who wrote 10 plays that look at the lives of African Americans and also the human condition.

Ashley Jordan, the recruiter of the August Wilson Monologue Competition and lead teaching artist for Milwaukee Repertory Theater, says that Wilson’s works can be enjoyed by anyone of any culture because of his relevancy.

“He literally has seven-plus plays that are phenomenal, that are grounded, that are clear, and that we can relate to,” says Ashley. “He writes about not only the racial injustices, he also writes about love, he writes about family.”

Wilson died in 2005 but his work impacts people today.

There’s a national student monologue competition honoring Wilson that’s been happening since 2007. This is the first year that Milwaukee students will be participating in the event, as the Milwaukee Rep has been selected to host.

Ultimately, two Milwaukee students will fly out to New York to deliver their best Wilson monologues. But first they’ll need to win the local match.

“As a teaching artist, one of the things that I’m really big on is understanding who the students are first,” says Ashley. “I had one student and he was like, ‘I don’t really think I’m an actor. I’m not into monologues or anything like that.’ I said, ‘So what are you into?’”

Ashley says that the student responded that he was into sports. Immediately Ashley thought of Wilson’s play “Fences.”

“Fences” is a play about the breaking down of a father and son’s relationship through a means of sports but also in how the harsh realities of racism can disrupt families and affect people on a personal level.”

Jeffrey Mosser, associate director of education at the Rep, says that the students are really connecting to “Ma Rainey’s Black Bottom” partially due to its debut on Netflix. However, plays like “Fences” still stand out to the students.

“I think I’ve been hearing about a lot of students who are interested in doing something from ‘Ma Rainey’ because just because they see it, they know it, and they can start to feel it a little bit,” says Jeff.

But as the selection of monologues the students can choose from is so broad, Jeff says that the students pick up pieces that he wouldn’t have guessed.

Jeff says they’re working with organizations like the Boy and Girls Club to host workshops and reach students across Milwaukee. They are also giving workshops during normal classroom time to gather talent.

Ashley says it led to some powerful moments of connection.

“There are two young ladies that I think of in particular, they go to completely different schools, and they’ve never met a single day in their life,” says Ashley. “All of a sudden, when they came into the session, it was like they literally are mirroring each other.”

The competition is more than just a chance for students to perform. Jeff says that with the competition they’re inserting more Black and Brown playwrights and authors’ works in the classroom.

“One amazing aspect about August Wilson is that he is a civics lesson,” says Jeff. “He is a theater lesson. He is a literature lesson. The whole thrust of this process is to get August Wilson in schools and to be recognized as a national literary figure. He’s writing with a contemporary voice, he’s writing stories that are that hit personally, and that aren’t hundreds of years away, like Shakespeare or like some of those other Greeks.”

Ashley and Jeff say that the workshops have students wanting to know not just about August Wilson but other Black and Brown playwrights, which is what they hoped and are excited for.