The Milwaukee Visionaries Project is creating the next generation of filmmakers

The Milwaukee Visionaries Project is creating the next generation of filmmakers 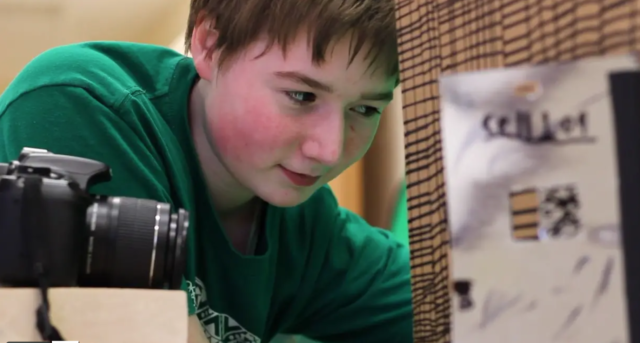 Milwaukee-area youth are getting a once in a lifetime opportunity: to see their film work on the big screen. Through an after school program called Milwaukee Visionaries Project, middle school and high school students are learning the art of storytelling and the craft of filmmaking.

Learn more about the MVP after school film program from Program Coordinator Emily Berens, and watch one of the student films in the media players below.

“I can say I did not have anything like this,” Berens said as she reflected on the arts programming that existed during her youth. She remembers a darkroom for a photo class, but not a green screen space like the one her students just shot a video on.

Every Thursday for a couple of hours after school, about a dozen kids from different schools around the city pile into the basement of the Kenilworth Studios. The walls are decorated with props, 3D animated characters and molds for future characters. This is the Milwaukee Visionaries Project (MVP) studio.

Berens, who teaches film courses at the University of Wisconsin-Milwaukee, also volunteers with MVP as an instructor and program director. MVP got its start nine years ago and has evolved into a competitive film program.

“From 2014 onward, we’ve actually had two to three student projects in the Milwaukee Youth Show every year,” Berens says.

She described another instance where an eighth grade student got their work into a film festival in Houston. “One of the coolest things now is that kid is a freshman studying film at UW-Milwaukee.”

These full circle moments keep Berens coming back every year. “Every year it’s just magic to have that student who finished their first real film,” Berens says. “And gets to see it on the big screen at the Oriental Theater with their family and friends.”

The program runs during the school year and meets every Thursday after school at Kenilworth Studios. MVP admits students into the program year round. Students interested can have their parents enroll them here.