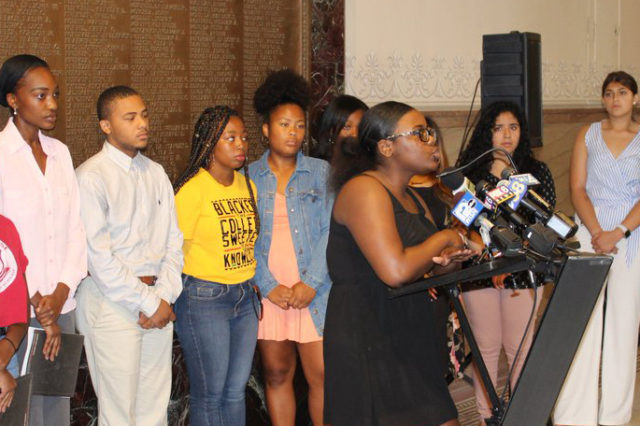 “Little convicts.” That was the phrase recently used by a conservative blogger to describe students at Vincent High School.

It was in a September 11 essay published on the website Right Wisconsin by Editor James Wigderson. The essay was critical of the the district’s plan to build a multi-million dollar athletic facility at Vincent High School. 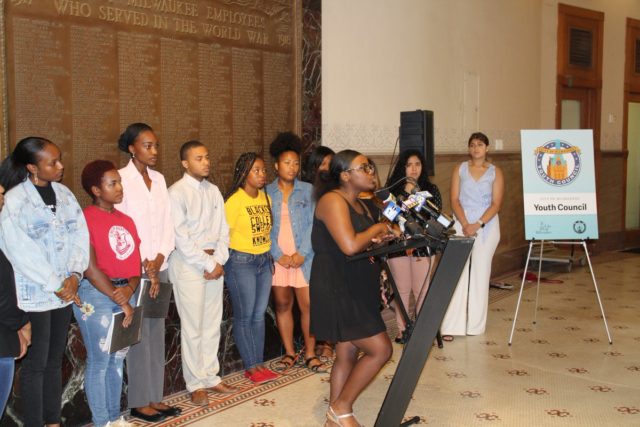 As you might expect, those comments didn’t sit well with many MPS staff and students, including Riverside High School Student Emoni Gambrell-Toliver.

She also serves as President of the Milwaukee Youth Council, a youth leadership program established by the Milwaukee Common Council in 2005.

“I personally started crying. I tried to hold it back, but I started crying” she said. “So I brought it up at our [Milwaukee Youth Council] meeting, and when I went home I decided to just write it down on paper.”

So, she did just that. She took a breath, collected her thoughts and put out a press release. She begins by thanking the blogger.

“I would simply like to thank our critic James Wigderson. Thanks for opening our eyes to realize that people like you still exist,” she said in the statement.

She goes on to write she expects the new athletic stadium will actually increase academic performance and attendance. She closes with a call to action.

“I encourage you to continue to keep up with our dollars, not only how much we’re spending, but also the huge number of scholarships we earn and the significant return on investment that total represents,” she said in the statement.

Blogger James Wigderson quickly responded to an email seeking comment on Wednesday, saying that his comments were “clearly not racist” and that he will “not stop advocating on behalf of the students in Milwaukee who deserve far better than an MPS administration that continues to have completely mixed-up priorities.”

He did not apologize. But to the Youth Council, that doesn’t matter.

“We don’t want an apology from anybody. We just want to prove him wrong, in the right way,” said Gambrell-Toliver.

As for what’s next for Emoni after high school, her plans are ambitious. She wants to attend a Historically Black College and pursue a legal career.

“Maybe an alderwoman and a lawyer. But I know for sure that I am going to be lawyer,” she said.

As a student at Riverside University High School I would love to speak not only for myself, but for the entire Milwaukee Public Schools student body! I feel compelled to speak out because of the role I play in our community and because of who I am as a person.

I would simply like to thank our critic James Wigderson. Thanks for opening our eyes to realize that people like you still exist. Being in MPS my entire life, my feelings took a serious hit because of your hateful rant about the facilities upgrade at Vincent High School. I am proud to say that you are everything our great teachers prepare us for.

In every bunch there are always bad grapes, but who are you to blame the entire vine?! But let’s list facts: The $5.7 million stadium that you’re so disturbed about will only increase our numbers academically, it will only increase MPS attendance and it will help to LOWER the number of students that are sent to the penitentiary that you speak so fondly of.

For you to label us convicts was completely discourteous and mean spirited. I encourage you to continue to keep up with our dollars, not only how much we’re spending, but also the huge number of scholarships we earn and the significant return on investment that total represents.

MPS raised us to stay focused, to beat the odds and to see veiled hate and racism like yours when it bubbles up from a darker place.

Then, the blogger, Mr. Wigderson, responded Wednesday with the following:

No matter how misinformed Gambrell-Toliver was about my statement, no matter how the Milwaukee Journal Sentinel and my critics intentionally mischaracterized what I wrote, I will not stop advocating on behalf of the students in Milwaukee who deserve far better than an MPS administration that continues to have completely mixed-up priorities.

My statement was clearly not racist, no matter how badly it was mischaracterized by those that wish to distract from the failures of MPS and preserve the status quo. The phrase that supposedly has so many upset at MPS was clearly about one student and one example of the bad priorities of MPS. It’s not me that owes an apology or should have any regrets, it’s the administration of MPS and Superintendent of Public Instruction Tony Evers who has continually failed the students in their care.

I wish Gambrell-Toliver nothing but the best, and as a fellow MPS alumnus I strongly encourage her in joining me in supporting alternatives to the failures of MPS, including voucher and independent charter schools, which are proven to be effective at helping to close the minority achievement gap.