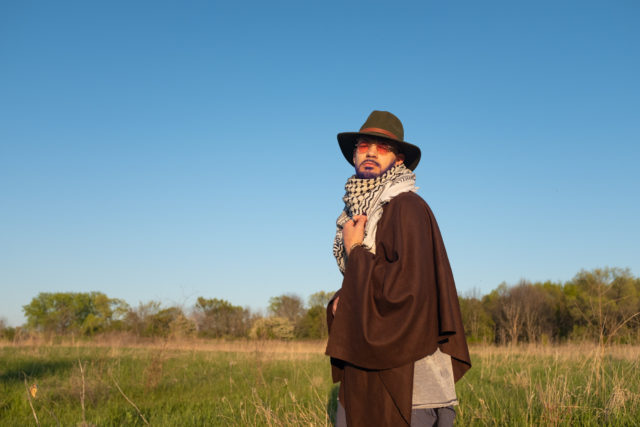 With their new EP “Wild Love,” Milwaukee musician Jabril Yousef has created seven songs that map their journey of self-discovery. The EP blends electric pop and folk genres as it tells the story of navigating selfhood as a non-binary Arab American. For Yousef, however, storytelling didn’t just start with this EP. Yousef is a journalist and in 2014, they cultivated a community-driven news outlet called Milwaukee Stories, a platform that shares the stories of Milwaukee folks.

“I remember the first day that I went,” said Yousef. “I parked around 33rd and Lisbon and just walked around the neighborhood for a little while, with my voice recorder, my camera, and talked to one or two people. I had some nice conversations and people noticed me and that was nice.”

That first day on the job sparked over 200 personal stories across more than 65 different neighborhoods. Jabril describes that time as meditative, following their gut on which road to take to find local Milwaukeeans to speak with. It was the experience through Milwaukee Stories, hearing the experience of others helped Jabril find the right vocabulary to share their own story.

“I write music to process the world,” said Yousef. “Sometimes I struggle with how to express myself just verbally, just in conversation and that’s coming along. A song can be a venue for radical truth and acceptance. It just incorporates so many aspects of what I considered to be the human experience.”

One of Yousef’s personal tracks is “Boxes,” which is coated with Americana elements as it rejects the idea of being placed in a box regarding identity, a common theme throughout the EP.

“My journey into realizing my queerness and my transness was rooted not in sexuality,” said  Yousef. “What it is rooted in is a grander understanding of who we are together. That is core to me in understanding myself and my queer identity.”

Yousef also goes on to say that the same goes for their Arab American identity.

“I actually had someone ask me this recently, ‘Why don’t you describe yourself as a German, Irish, Lebanese American?’ I suppose I could, but growing up in America, it was the Arab part that stuck out,” said Yousef. “It was my queerness in not truly ever being a man, but being perceived as one and my Arab-ness. So I stuck out, I never really fit into the molds, the boxes that were made for me.”

Although music is abstract, it’s a form of expression. A moment in time where you feel seen and heard. It moves us and stirs even the deepest of our emotions.

“Sometimes I reflect on the fact that I could be doing anything,” said Yousef. “I could have done anything. Instead, I made these seven songs.”

“Wild Love” is streaming now on all platforms.