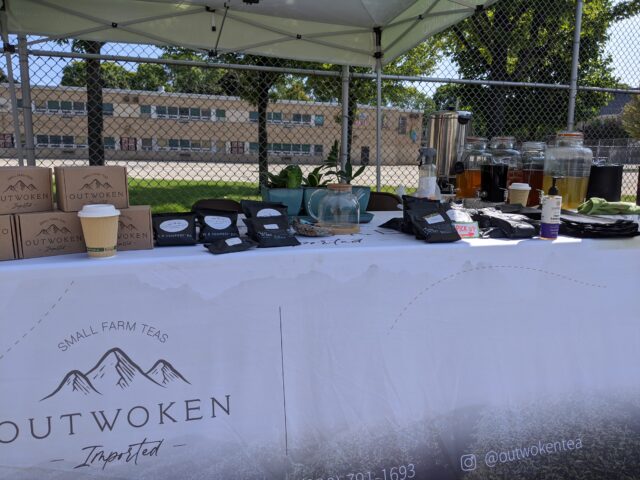 The idea to open a small farm tea shop came to Aureal Ojeda after working for a few years in construction.

“I’ve done everything from labor by shoveling asphalt for three years, then I did work on the trolley downtown,” Ojeda says, “I made history with that. That was beautiful to be a part of.”

Her most recent job had her working in demolition and excavation projects, where she would notice the amount of waste that ended up in landfills. It was standing at the top of a waste pile that made her realize how much damage was being done to the planet.

The trash mountain disheartened Ojeda. The push she needed to open Outwoken Tea came on a rainy day.

“Literally, a plastic pouch just smacked me in my face from the wind,” she laughs, “and I guess that was my smack in the face.”

Ojeda says she decided that she wanted to start a business and that whatever she created, she would put the earth first. So she chose compostable and recyclable materials for her packaging.

But why tea? The decision came from health considerations.

“I was very overweight, I was about 220 pounds and currently I’m down at 160,” Ojeda says. “I lost a lot of weight, and in order to do that I had to change my lifestyle. I had to change my habits, my mindset. I had to change everything in order for me to not become a diabetic and be sick and live this life I didn’t want to live. Tea was one of the drinks that I took up as a habit.”

Ojeda studied the history of tea and appreciated its medicinal uses. Though there was something else about tea that resonated with her, too.

“Tea came from my background of being a single mother for many years before I met my husband,” Ojeda says. “It was very hard raising a child from the age of 17; I was a child myself. I know how hard it is to provide for your child and still do that.”

So she says she chose to work with small farms that are typically family or women owned. It was important to her to stick to her values and help people.

As far as the pandemic’s impact on her business, Ojeda says she doesn’t know what her business would be like outside of it. She was intent to launch in March and was at an event when the state delivered its orders to shut down non-essential businesses.

The pandemic meant that she, like a lot of other business owners, lost out on the Democratic National Convention and its potential opportunities. She also couldn’t run or participate in the events with local universities that she had started planning before the shut-down orders. Ojeda had to reinvent her business to survive.

She’s been selling her teas online and at the events she has been able to attend, like the Riverwest Farmers market. She’s even participated in Milwaukee’s version of Shark Tank, Dolphin Pool.

“I have adapted, I have grown,” she says of opening her business during the pandemic. “My business is definitely stronger because of it.”