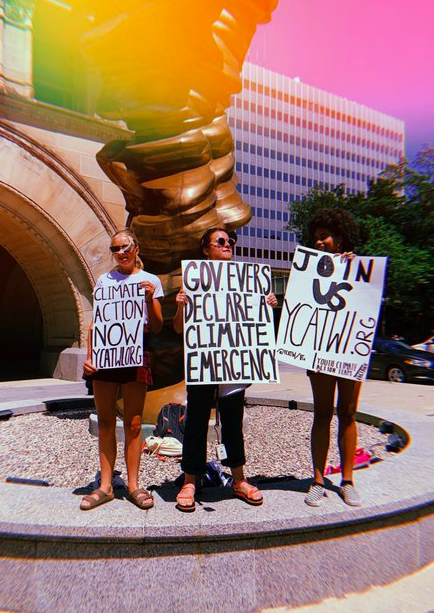 Kiva Carman-Frank and Ayanna Lee are both part of the Youth Climate Action Team, an entirely youth-run organization here in Wisconsin. YCAT started when a number of Madison high school students gathered to discuss the possibilities of a school strike to demand climate justice in the state of Wisconsin. On March 15, they drew a crowd of roughly two thousand amplifying their voices and their mission.

The movement spread like rapid-fire throughout the state and it is currently one of the largest youth-led climate coalition in Wisconsin. However, Carman-Frank says that the Milwaukee chapter is currently aligning its focus on local issues.

“We’re looking at environmental racism and how that impacts our community,” said Carman-Frank. “We’re looking at how extreme weather impacts our already underfunded infrastructure. We’re talking about water pollution through the violation of indigenous treaty rights or lead poisoning. So we  have different needs in our community specifically than even the whole state.”

Historically, the youth have always played a role in activism but sometimes have been dismissed because of their age. Lee says that now more than ever, youth are at the frontlines of climate justice because their generation sees the most impact.

“So I live in Milwaukee, in the city, so I definitely see the effects environmental issues daily,” Lee said. “I mean we didn’t go to school for an entire week because it was too cold and our communities are super polluted because the highways go through all of them and we’re the least to contribute to those things but the most likely to be impacted by them, daily.”

Carman-Frank says one of their goals is for marginalized communities to be one of the focal voices of the movement but to also be given resources.

YCAT contributes to the conversation of climate justice as an ethical and political issue by demonstrating weekly strikes yet that’s not the only method of dialogue.

“It’s not always a protest, it’s not always a demonstration,” said Carman-Frank. “It’s direct service, it’s art, it’s talking about things, it’s speaking and writing and bringing the issues to your community. It’s really about just engaging at whatever level feels accessible to you at that point and realizing what is possible for us.”

YCAT will be participating in a global climate strike on Sept 20, on that day there will be a school and general strike to end the age of fossil fuels. You can find more information and upcoming events on their website.