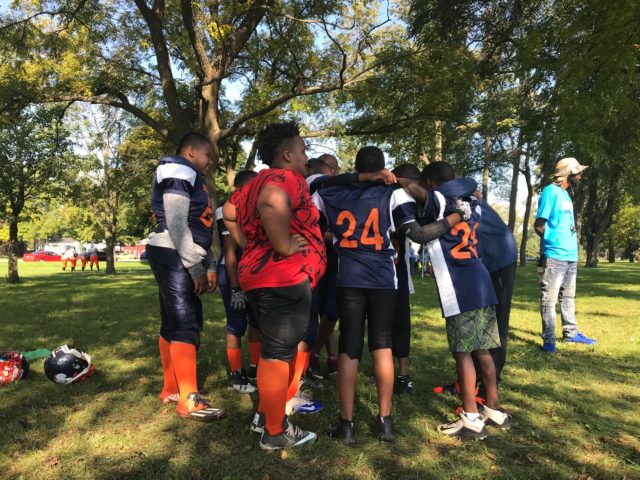 As accessible as sports may seem, there isn’t much of a level playing field when it comes to organized sports for inner city youth. The Neighborhood Children’s Sports League in Milwaukee is working to give young African-American boys the same level of access to organized football as their suburban counterparts.

Hear more about this community-based league from Coach Keith Willingham of the NCSL Broncos football team in the audio story below.

The NCSL was established in 1958. Despite going back as far as they do historically, what NCSL provides for Milwaukee’s inner-city youth remains relevant and vital today.

Playing organized sports can be expensive, especially if it requires a lot of equipment the way football does. For families in low-income communities, organized sports may not become accessible until high school. And when funding was cut for public schools in the city, some schools were no longer able to afford to have teams at all.

According to Willingham, the kids’ suburban counterparts have greater access to sports at a much younger age. “That’s why these schools having winning programs,” said Willingham. “They start at an early age so these boys are familiar with each other.”

This disparity inspired Willingham to use his years of football experience in college and as semi-pro player to teach the game to inner city boys. But he takes pride in more than just creating a winning program.

“A lot of these boys don’t have fathers,” said Willingham, adding how important mentorship is to him and his assistant coaches. He adds they strive to be positive and uplifting role models for the boys. His impact has been visible both at home and in the classroom as the boys receive good grades in the classroom and follow healthy eating habits suggested by coach.

For information on signing up children for the football league or donating to NCSL, a non-profit organization, visit their website here. Teams play every Saturday at Lincoln Park and a schedule can be found on their homepage.