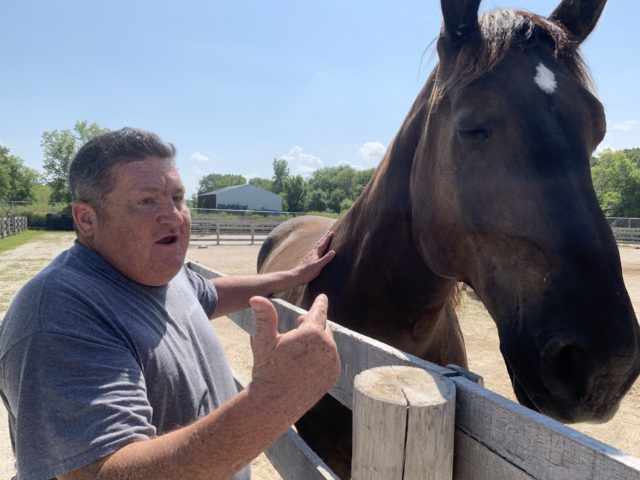 As MKE Urban Stables prepares for its grand opening this fall, volunteers are hard at work getting the therapy horses ready for interaction with the public. Two of those volunteers, who also happen to be veterans, invited 88Nine to the stables for an inside look at their work with the horses.

Both vets speak to the power of horsemanship and equine therapy and share how it has benefitted them. Listen to or read the Community Story below.

Glenn Scheuerman: “So basically what we do is feed them, clean them, and spend a little time with them.”

Nate Imig: There’s something special, a certain feeling you get when you’re around horses. If you’ve felt it, you know.

Glenn Scheuerman: “Nothing by far, nothing compares to being with the horses.”

Nate Imig: That’s Glenn Scheuerman. He’s retired Army Sergeant who now spends time volunteering at MKE Urban Stables in Bay View. Glenn spent his career in the army, and, most of all, he says he misses the camaraderie. But through equine therapy, he’s found a way to feel that feeling again.

Glenn Scheuerman: “We help each other.”

Nate Imig: Glenn is working with a pair miniature horses that just arrived at the stables, doing laps around a indoor arena, working on a process called gentling. It’s essentially getting the horse used to working with humans.

Glenn Scheuerman: “So you gotta be careful. I’m a big pushover. Don’t want the horses to find it out.”

Nate Imig: For Glenn, this isn’t his first time working with a horse. He’s also spent time with a much larger horse living on site at the stables.

“And he not only set his head on my shoulder, he literally laid his whole weight on my shoulder. It didn’t hurt, you know, but it felt like, ‘you got my six’ as we call it an army, you got my back. And he felt like he did.

“You know how awesome that feels? Because I do, I have problems with self-esteem and self-confidence so sometimes I feel I trust horses more than I trust humans, unfortunately.”

Nate Imig: Equine therapy has been around for centuries. And it’s because many believe horses are particularly intuitive. Sherri Jibson is a Gulf War navy veteran and also volunteers at the stables. She says from her experience, the horse can always tell how you’re feeling.

Sherri Jibson: “I’m working through some trust issues, anxiety issues, about different things that have happened in my life.

“So that’s what. When people get older, that’s one of the things they struggle with is purpose. That’s definitely gives you purpose, goals you know?

“I guess one of the life statements that I tried to teach my kids is if you learn something new every day of your life, you’re good. And this definitely gives you that opportunity.

“If it weren’t for the horse involvement, I probably wouldn’t be here because they saved my life.”

Nate Imig: MKE Urban Stables in Bay View will open to the public this fall offering equine therapy programs to all. But for now both Sherri and Glenn are helping the horses get settled in their new home, alongside the Milwaukee Police Department mounted patrol.

If you want to learn more about the MKE Urban Stables, check out our recent Urban Spelunking episode, featuring an overview with board chair, Kent Lovern.