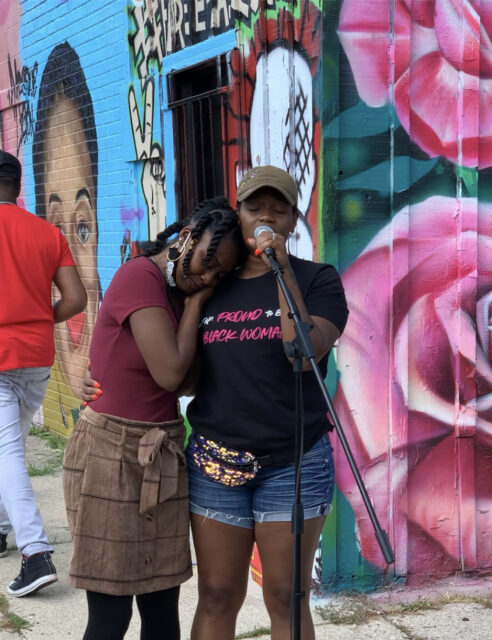 “We talk about how great they are and the things they have done to make an impact and usually we wait till it’s too late to give them their flowers,” said Kaylan Haywood II, State Representative. “Today we are giving them their flowers while they are still alive.”

The mural unveiling celebration started with a blessing, a tribute to the late Eric Von, poetic performances and ended with a Theresa Marie Collections fashion show. It was joyful, profound and healing. To many, the installation was a symbol of unity, optimism and a chance to uplift the voices of an upcoming generation.

“I’m the girl that barely made it out of Rufus King High School,” said Senator Lena Taylor, while holding back tears. “I’m her. And this wall represents hope.”

“I am excited to be here today not only about being on the wall but just something that brings us together other than a funeral other than a tragedy,”  said community organizer Andre Lee Ellis. “Other than the fact that these young people have been protesting and walking in these streets every day for some 70 days.”

The honoring had impactful performances starting from artist Becca Wigley singing a heartfelt rendition of “The Miseducation of Lauryn Hill.”

Another chilling performance was by 15-year-old poet Janiya Willams.

“They taking back the street we ought to be there to protect it,” said Andre Lee Ellis. “That little girl made me cry and so did my 90-year-old mother sitting in that black car over there watching right now. She’s sitting right over there with good sense watching her baby on the wall.”

Milwaukee’s poet laureate Dasha Kelly Hamilton dedicated her poetic piece to everyone, regardless if they were on or off the wall.