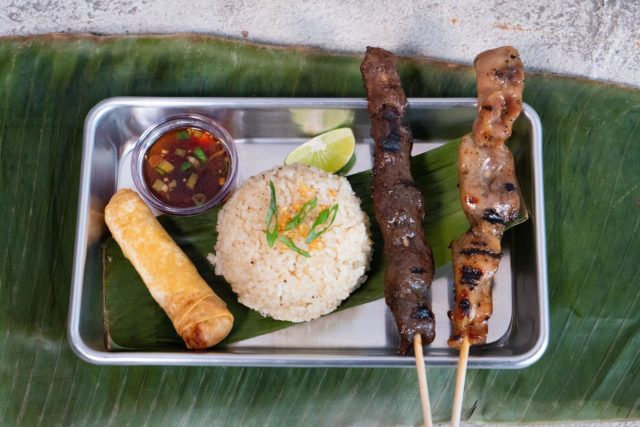 Filipino cuisine probably can’t be defined by a single term or even a few terms. It’s hard to pinpoint a sole description when the Philippines consist of roughly seven thousand islands.

However, Meat on the Street, a Milwaukee family-owned Filipino storefront and food truck, brings some of the flavors of the islands to you. Alexa Alfaro, one of the sibling co-owners, said her family’s love for food came from bonding together when cooking.

“My dad would just cook Filipino food once in a while,” said Alfaro. “On my birthday, I would beg him to cook certain Filipino dishes, so we would spend all hours of the day prepping and that’s how we would spend time together.”

In 1988, the American National Historical Society declared October Filipino American History Month. Documents cite October of 1587 as the first presence of Filipinos in the United States. In fact, Filipino sailors were the first Asians to arrive in North America.

“I was Filipino because I had dark skin and dark hair,” said Alfaro. “My dad did weird things like leave fish heads in the fridge. We would go out for Japanese often and my friends would see miso soup and call it lake soup. Growing up when I was younger just meant that I was odd and different.”

It was in high school where Alfaro had a chance to interact with other Filipinos which then helped her further embrace her roots.

“It wasn’t until we opened the business that I really started to be interested in aspects of the culture other than the cuisine,” said Alfaro. “‘So, ‘what is our history? What does it mean? What have we been through?’ I didn’t know anything until I became friends with Filipinos who either have a passion to spread knowledge or pick up things our culture has left behind.”

For Alfaro, October is an opportunity to reflect on our history and acknowledge the diverse ethnicities and backgrounds that make us who we are.

“It’s just a reminder to constantly be wanting to learn and educating myself and others,” said Alfaro. “To discuss differences in history and how do we continue to move forward, in a positive light. In our own lane but also amongst others as well because a lot of different ethnicities go through the same struggles that we have gone through.”

As this month comes to a close, it can give us the occasion to start a conversation, support local businesses and acknowledge history.