‘On the Wings of a Mariposa’ introduces loss to kids

‘On the Wings of a Mariposa’ introduces loss to kids 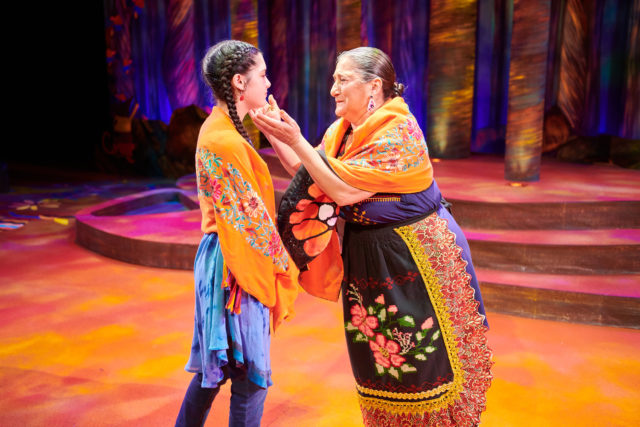 First Stage debuted its production of “On the Wings of a Mariposa” by Alvaro Saar Rios on Oct. 18. The play is an adaptation of the children’s book “Ghost Wings” by Barbara M. Joosse and follows 10-year-old Pilar as she copes with the passing of her Abuelita. Pilar uses the scent of her grandmother’s scarf in order to keep her memory alive.

Director Karen Estrada said the production is bilingual for two main reasons, so everyone in the audience can understand and because the dialogue was treated as poetry.

“The children’s book is written in a very lyrical style as well and he (Rios) wanted to keep that sort of lyrical nature,” said Estrada.

The play is centered around Dia de Los Muertos, known as Day of the Dead. The theme was meant to remind family, specifically children, to gather and remember loved ones.

“What is lovely about the play is that it introduces kids to death in this really gentle, generous manner,” said Estrada.

One of the greater lessons was understanding that death is a natural part of the human cycle and ones’ spiritual journey. Estrada said one element within the production that tied perfectly with the Day of the Dead was the Mariposa, the Spanish term for butterfly.

The concept of butterflies migrating is essential to the entire production. Every time Pilar’s grandmother would appear on stage, she would be surrounded by butterflies which signified that her spirit is carried through the wings.

To dig a little deeper, Estrada even explains that a Mariposa’s journey is generational.

“The butterflies that return from Canada and the Northern United States to Mexico have never taken that path before,” said Estrada. “It’s just somewhere in their genetics, and the ritual of sameness gets passed on in this crazy way that we don’t entirely understand.”

The entire production was created with such care and attention to detail. The design of the set was transformed into a circle, to symbolize a life cycle. There was a grand backdrop of a forest covered with butterflies, audience members sitting in the back could see the rich texture and colors. The playbill even contained a recipe to make your very own sugar skull cookies.

I saw the production on opening night and was left with a deeper understanding that mourning the loss of a loved one is completely valid and natural. Just like the butterflies migrating back to Mexico, however, loved ones can meet again.

First Stage collaborated with Latino Arts and United Community Center to create “On the Wings of a Mariposa,” which runs through Nov. 10. Tickets are available here.

The original music and lyrics used in the audio segment courtesy of Dinorah Márquez.