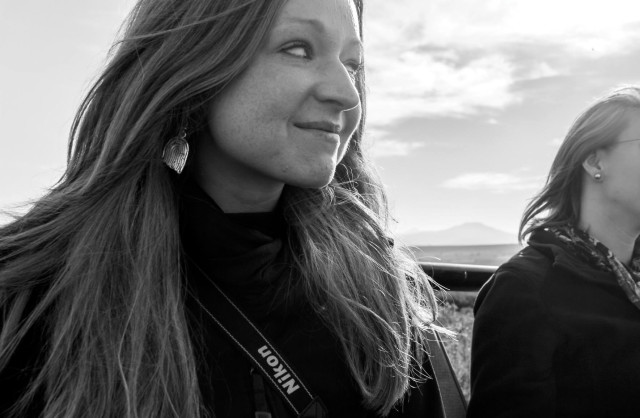 Click on the player above for the audio accompaniment to this piece.

I suppose I should introduce myself with greater formality than my name being tacked onto the credits of a video.

Hello! A few months ago I joined Radio Milwaukee as their new Video Producer. My team and I have hit the ground running with new content and exciting ideas that are expanding how you, our audience, can connect and engage with us in a more visual way.

Reserving an introduction until now seemed appropriate, as last week, being National Eating Disorders Awareness Week, afforded the relevance to share the other side of my work that I hope will better-explain who I am and the motivation from where my work comes.

A blue dress in a small Washington, D.C. boutique changed the course of my life.

I did not expect ... the overlooked story I would be digging into was my own.

In 2010 I moved to DC as a recent college graduate with grand visions of being an investigative reporter. My curious nature was attracted to the idea of asking hard-hitting questions that dug into stories no one was talking about. I jumped at the opportunity that yet another internship afforded and walked into my first day at Al Jazeera English confident I would immediately be dispatched to cover the aftermath of the Haiti earthquake or the escalating unrest in Tunisia.

That did not happen.

I alternately settled into the city that would become home for the next five years while working for media organizations that solidified my transition into film production. This indeed became a channel for me to ask the hard-hitting questions I was after, what I did not expect is that the overlooked story I would be digging into was my own.

While in the dressing room of that boutique in 2010, I looked at how the silky blue dress fell over my body, admiring how the color complimented my hair and scrutinizing the way it cinched my waist. I overheard a woman talking very openly about eating disorders to the sales clerk. I froze.

There was something about the words “eating disorder” and “anorexia” that were still paralyzing. Hearing it voiced aloud was like someone shining a flashlight into the dark, caged part of my insides where this powerful force resided.

The contradictory part is that the words I was most afraid of hearing out loud were the same words that were voiced loudly and tirelessly in my head every day. I taught myself how to muffle it. How to act careless and confident in moments that required poise.

But the truth is: I was still residing in the dark cage with it.

I nervously stepped out of the dressing room and approached the woman with a handshake and a smile. I walked away with a business card, a new blue dress, and a certainty that things were about to change..

Googling “anorexia” nearly five years after being diagnosed with the illness seems like an inane thing to do. But the truth is that I had resigned myself to the isolation of my experience, the lack of treatment I received, and the secrecy it demanded.

Three months after that exchange in the boutique I began examining my own experience with the same objectivity I tried to confront any story with.

Why weren’t the doctors my desperate family and I went to able to provide us with the answers or resources we needed? Why didn’t my insurance company cover the treatment my life depended on? Why was talking about eating disorders reserved for the sensationalism of emaciated celebrities and runway models?

Why has nothing changed ten years after my experience?

This was a responsibility I could not walk away from as the magnitude of this story unfolded; No one was talking about this.

I had no idea I was one of roughly 30 million Americans with an eating disorder. Or that getting proper help is hard for nearly everyone. Or that there are people actively trying to change all of that at the federal level, driven by their own brushes with death or loss of loved ones.

Five years ago I started a documentary “Just Eat.”

It’s time for the dangerously misguided assumption that eating disorders are a chosen affliction of females angling to look like pre-Body Positive Barbie to be replaced with the pressing issues of insurance denials and federal oversight.

The deadliest mental illness, estimated to kill 23 people every day in the United States alone*, is not a choice.

Being open about our experiences, however, is a choice.

Just Eat has followed the past 5 years of the 16-year grassroots movement that is fighting to make eating disorders a legislative priority. For the first time in history the first eating disorder-specific bill has been introduced to Congress with bipartisan support in both the House and the Senate. Just Eat remains in production as our cameras continue to follow this never-before-told story.

Last week was National Eating Disorders Awareness Week. I think that’s great. Any cause that is able to give the media a reason to pay attention to it for a designated period of time is hugely beneficial.

For a disease that thrives in silence, talking about it is integral medicine.

But I dare to say that reserving one week out of the year to pay attention to an illness that affects millions of men and women of every age, race, socioeconomic status, weight, body type, and religious affiliation on a daily basis is not enough.

For a disease that thrives in silence, talking about it is integral medicine.

In October 2015 I moved back to Milwaukee and excitedly assumed the role of Video Producer here at 88Nine. Working on stories that showcase the music, artists, and community stories that constitute a hearty portion of things I care about turns my heart into the “hugging face” emoji.

The Radio Milwaukee website will now be a cross-section for these things. An outlet to share the experiences of a first-time director (me) trying to make a feature-length documentary happen independently. Once a month I’ll share the progress, or attempt at progress, in the form of a blog post. A chronicle of how a film like this comes together, from the crushing reality of what it takes to secure funding to meticulously planning a shoot that will ultimately not go as planned.

If you or someone you know is struggling with an eating disorder, please don’t underestimate its seriousness. Here are some helpful resources:

Just Eat is a 2015 Brico Forward Fund recipient, in partnership with the Milwaukee Film Festival. For more information go to www.justeatmovie.com