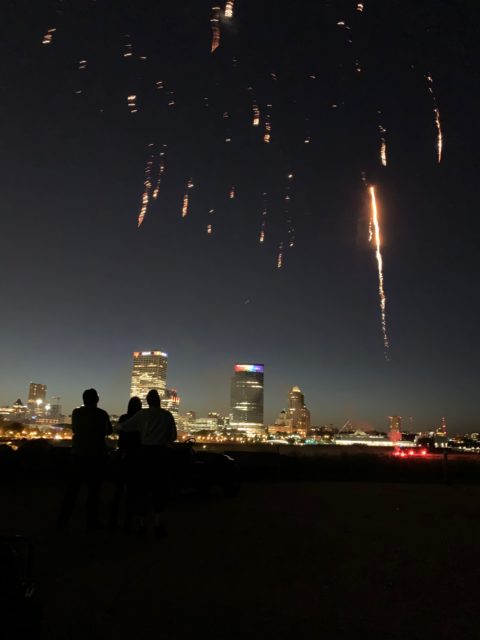 You might not have known that Milwaukee’s PrideFest was the first pride event to display fireworks. Ever. Today, fireworks might seem like a simple addition to a festival but the colorful, booming show meant something 25 years ago. To some fireworks mean celebration, but to the LGBTQ it meant that the community can stand in unity, dignity and show the world their true authentic selves loudly. It meant pride.

If we go back in time to the ’90s, gay rights were a focal point in politics. The Clinton administration issued a policy prohibiting harassment against closeted military personnel, while not allowing openly LGBTQ personnel in military service. This policy was known as the “Don’t Ask, Don’t Tell.”

Jump a little forward to 1995, Joe Masnaghetti (Maz), the crew chief of the fireworks shooting crew, worked tirelessly to create a spectacular show made exclusively for PrideFest and the pride community.

“There were plenty of people who probably wouldn’t have sold a show to people that are gay and my dad was like nope whatever they’re people too,” said Linda Masnaghetti, Joe Maz’s daughter.

This year, PrideFest honored Joe Maz for his contributions to the pride community. His daughter, Linda Masnaghetti, is following her father’s footsteps and igniting the fuse for the fireworks show.

“It means the world to me to be able to support them and support equality,” said Masnaghetti. “My dad felt the same way 25 years ago.”

Today is a significant day. It marks the 50th year since the Stonewall Riots. The Stonewall riots started when young LGBTQ community members and protesters engaged in a demonstration against the police outside a New York bar, the Stonewall Inn. This historical night had a domino effect in the advocacy for LGBTQ rights worldwide.

If we take a look at how far we have come from historical moments such as the Stonewall Riots and policies similar to the Don’t Ask, Don’t tell, imagine what next years pride will bring? Inspiring future generations all thanks to a “made to look effortless” firework show and Joe Maz.