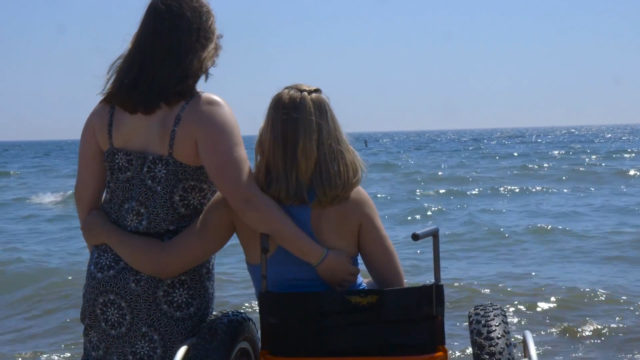 For years, Bradford Beach has been one of Milwaukee’s most well-known summer hot spots. With food, drinks, recreational activities and a fantastic atmosphere, thousands flock to Lincoln Memorial Drive during summer to experience the cool lake breeze and enjoy time with friends and family. Despite this, there is a demographic which is largely unable to enjoy the sand and sun: individuals with physical disabilities.

In 2015 however, Wauwatosa based non-profit organization The Ability Center stepped in to correct this overlooked problem by launching their RampUpMKE initiative. The first step in the program was making Bradford Beach temporarily accessible through innovative beach wheelchairs and walkways which led to the water. Since then, RampUp similarly helped to make Veteran’s Park, Red Arrow Park and Wilson Ice Arena more accessible and are now returning to Bradford Beach to improve on what started all of this by creating three permanent ramps and bringing beach wheelchair rentals to the coast.

As simple a concept as ramps and beach wheelchairs are, the implementation of these on beaches is largely unheard of across the country and founder of The Ability Center, Damian Buchman, believes that they are leading the way in improving accessibility. This is due in large part to Buchman’s philosophy regarding this topic. Whereas ADA (American Disability Association) compliance is often seen as an obligation which results in those with wheelchairs being able to enter and exit areas, Buchman believes that individuals with disabilities are still left feeling like outsiders due to society often creating these options solely for them.

Using the planned Bradford Beach ramps for example, Buchman explains that the simple ability of the ramps to allow shoulder-to-shoulder movement helps to make those with disabilities feel welcome and use them simultaneously with abled-bodied people. In other words, the ramps don’t hinder the experience of those without disabilities and help reinforce the idea that accessible options can be used by everyone.

This change in public perception is actually why RampUp’s efforts so far have been focused on public spaces. Buchman believes that by showcasing a seamless integration between those with disabilities and abled bodied people through experiences, a ripple effect will occur and Milwaukee as a whole will begin to think about inclusivity everywhere they go; a change which they hope will echo outside of Milwaukee County.

While in the end, The Ability Center’s goal is for everything to be universally inclusive, they realize this isn’t realistic and instead are aiming to improve what is already out there before looking to create a universal park and an inclusive baseball field which follow the same principles as the Bradford Beach project. Ultimately, they plan to create their namesake: The Ability Center facility; a fitness, athletic, and recreation facility which would be welcoming to both those with disabilities and abled bodied individuals alike.

Currently, The Ability Center is looking to raise $100,000 to implement their plans for Bradford Beach and you can contribute through their GoFundMe page here.