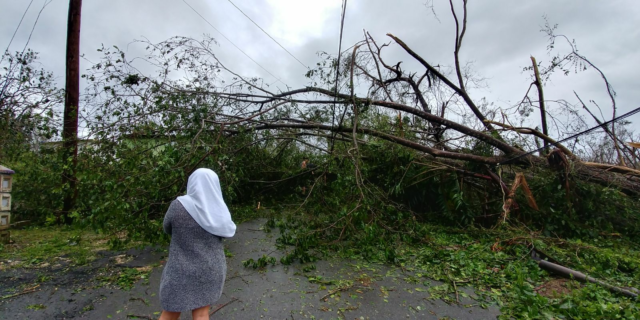 A RELIEF TRIP TO GUAYANILLA

Just because you may not have heard about Puerto Rico in the news lately, doesn’t mean things have gotten better. Sure, electricity has come back in some cities and supplies have been distributed, but there are still a number of people and towns still without clean water and power.

Nelson Rodriguez, who works as a merchandising analyst at Hamacher Resource Group in Pewaukee, organized a trip with coworkers to his hometown Guayanilla, Puerto Rico to provide supplies and relief support for the many people still in need of basic necessities.

Watch the video below to learn about Nelson’s relief trip to Puerto Rico.

Originally, he thought he’d be taking this trip alone. “I was going to go no matter what,” said Rodriguez. To his surprise, his coworkers wanted to help. Even the president of the company, Dawn Vogelsang, wanted to be a part of this journey. “Then it became a matter of who wanted to come with,” said Rodriguez.

He worked with the Guayanilla Mayor Nelson Torres Yordán and the Federal Emergency Management Agency (FEMA) to distribute supplies over several days in a gymnasium in Guayanilla. In a matter of days, supplies quickly ran out.

“The need is still huge and I just wish I could give more,” said Rodriguez. “My arm can only stretch so long, you know.”

The trip also gave Rodriguez the opportunity to visit family he hadn’t seen in a while. The trip fell on Three Kings Day weekend, which is a widely celebrated holiday in Puerto Rico and as well as in many Latin American countries.

On Three Kings Day, people celebrate the three kings who traveled by camel to visit Jesus Christ after his birth to bring him gifts. Children in Puerto Rico collect a pile of grass and water to leave for the camel, much like how children leave cookies and milk out for Santa Clause. In return, they receive gifts.

Rodriguez had the rewarding duty of playing one of the kings during the celebration they hosted. Trucks slowly paraded down streets early in the morning on January 6 with sirens to wake up the children. They knew the kings were coming. He handed out gifts and candy to young children whose spirits were bright and hopeful, despite the conditions Hurricane Maria left them with.