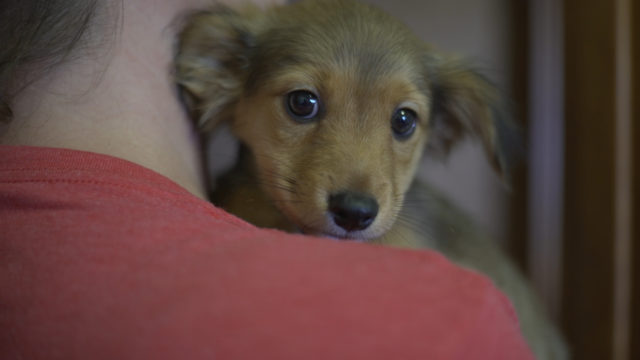 Rescue Gang is helping doggos find their furever homes. Cheesy, I know, but I couldn’t help myself.

Ryan Olson founded the volunteer-run organization three and a half years ago with the hopes to just “rescue a few dogs.” Today, Rescue Gang has saved 500 animals and they’re driving all the way down to Texas to save them.

Watch the video and read more below to learn more about Rescue Gang’s initiative that is sending two volunteers down to Texas to save dogs at risk of being euthanized.

Why Texas? It’s been almost a year since Hurricane Harvey caused destruction in the South. Massive flooding occurred in Texas prompting people to leave their homes—and unfortunately in many instances—leave their pets. Viral social media videos of dogs leashed to fences were heartbreaking and inspired Milwaukee dog rescue organization Rescue Gang to save dogs left behind.

Ryan Olson, the founder of Rescue Gang, was in it to save a few dogs. Olson started Rescue Gang three and a half years ago, when he was just 22. Today, his organization has over 170 volunteers who walk, feed, bathe and foster dogs saved by Rescue Gang.

As part of a new initiative sparked by the aftermath of Hurricane Harvey, Rescue Gang sends two volunteers at a time on a road trip to Texas. The volunteers visit shelters that may be overpopulated to save dogs that are at risk for euthanization to create more space in the shelters.

Volunteers travel to Texas every six to eight weeks to pick up rescues. They often leave on a Wednesday and return on to Milwaukee on a Friday where volunteers are waiting with leashes and poop bags in hand. After thorough exams and cleanings, dogs are put up for adoption and find new and loving homes in Milwaukee.