If this Milwaukee bus line is cut, who will it hurt?

If this Milwaukee bus line is cut, who will it hurt? 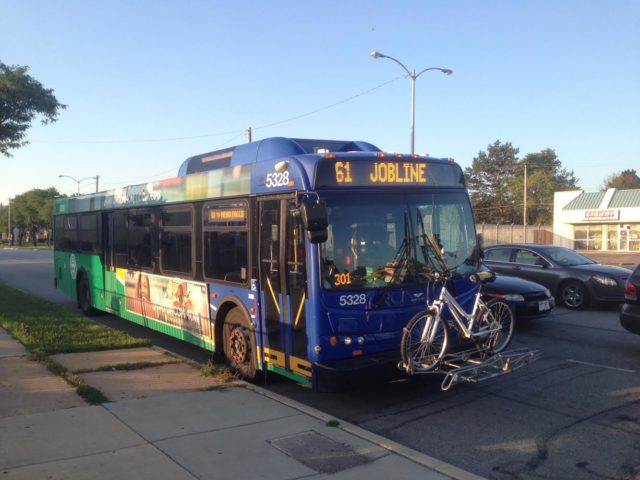 The effort to save Milwaukee's JobLine bus route 61

Rosa Yeh is a New York-turned-Milwaukeean who has depended on public transportation her entire life. She came to Milwaukee to attend Marquette University, and when she graduated, the job market was rough. Though it took a lot of work and patience, Yeh found a job in Menomonee Falls. For the last five years, she has relied on Milwaukee County Transit Services to get her from the South Side of Milwaukee to the village in Waukesha. Her commute will now face some changes has one of her bus routes will no longer be funded after December.

Listen to the audio story below to learn how riders and local organizations are teaming up to bring awareness to the JobLines bus routes.

The JobLines bus routes were established after a multimillion-dollar lawsuit began funding buses to transport riders from Milwaukee to Waukesha. The hope was that people in the city, especially in communities of color, would be able to find better work opportunities in the neighboring suburb. Now, the bus routes are expected to lose funding after December of this year.

Jim Addison of the Black Health Coalition of Wisconsin is one of many working on an informative campaign to let riders know they should consider alternative transportation methods–such as buying a car. He is also working on getting the MCTS to consider an alternative solution to discontinuing the line.

When asked “What if people can’t afford a car, will they have to quit?” Addison stumbled and responded: “Let me put it this way, I wouldn’t be surprised at all if that had to be the case.”

While ridership has been low on these JobLines routes, Yeh says she has seen a steady increase in the amount of people riding her 61 JobLine route—especially in the last couple of years. Yeh adds that she’s been saving for a car. A new job title will require her to have it when she transitions to her new role in 2019, but Rosa isn’t the only rider taking the JobLines to work. Regardless, she asks the community to “help save the [61] line for those who really need it.”