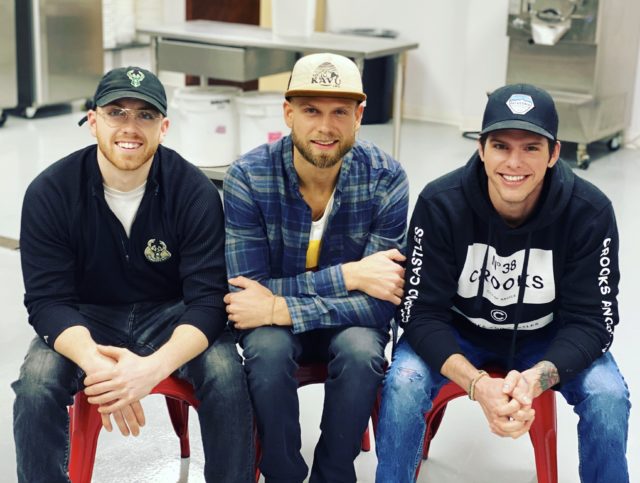 It takes the right combination of art and science to execute the perfect scoop of ice cream. With creamy, rich flavors like salted caramel waffle cone and blueberry cheesecake, Scratch Ice Cream might have nailed it. The popular ice cream shop has two locations, at Crossroad Collective, 2238 N. Farwell Ave., and Zocalo Food Truck Park, 636 S. 6th St., and its pints are sold at local grocery stores like Beans & Barley, Sendik’s and Woodman’s Market.

Over the past four years, owners Ryan and Justin Povlick and Dustin Garley have spent time perfecting their hand-crafted ice cream. Behind the scenes, when not exploring new flavors, Ryan and Dustin also aim to start a conversation about addiction and to inspire hope by sharing their personal paths to recovery.  This is their story.

Povlick first began drinking alcohol at age 14. Over time, he moved on to prescription drugs and then heroin. Although he wasn’t an unhappy kid, he said he always felt like something was missing.

“In the beginning, drugs and alcohol filled that void,” said Povlick. “It made me excited, it made me feel OK. It made me feel happy. I think I was 18, the first time I actually shot heroin and then it was really over.”

By 21, Povlick was beginning his strenuous path to recovery. Around six years ago, he met Garley in a sober living home.

Garley’s addiction started in middle school, after he was introduced to methadone, an opioid. As he got older, Garley recalls frequently passing out in public places while dependent on heroin.

“That’s when you realize, ‘I’m dying here.’ For me that’s where I was like, ‘Now is the point where I’ve got to do whatever I can to turn this around or just call it,’” said Garley.

Light at the end of the tunnel

Povlick and Garley stress that the road to recovery isn’t easy. Even after years of sobriety, they still face tough days, but they’ve learned to manage their response. They talk about the importance of taking it day by day, how it helped them through their recovery.

“What helped for me was building a life that I didn’t want to lose,” said Povlick. “I believe I am lucky more than anything else. For whatever reason this time around, I was blessed with the motivation to stay on the right path.”

“We both know so many people that are dead,” said Garley. “There really isn’t any difference between them and us other than we stayed alive long enough to figure it out.”

How ice cream played a role

After Povlick left the sober house, he kept busy by working for his aunt and uncle, who owned the frozen yogurt shop Yo Mama!. As time passed, Povlick saw the opportunity to open his own business, Scratch Ice Cream, in 2017.

He spent his time focused on finding the right fresh ingredients and crafting unique flavors, a task Povlick found difficult. That same year, he opened his own sober living house, Three Rivers Recovery.

Around this time, Garley relapsed and was living on the street. Povlick gave him a place to stay at Three Rivers Recovery and a job working at scratch. Once he was healthy he became a partner.

The owners hope they can set an example to show that people who struggled with addiction can persevere. That one’s past doesn’t define one’s future.

Scratch Ice Cream is in the works of finding two more locations to expand its facility in the upcoming Spring. Povlick says he hopes to employ more individuals in recovery. To give people the same opportunity that was given to him.

“Today I can look back and hopefully I can provide some hope for people that are struggling,” said Povlick. “There is a better life.”