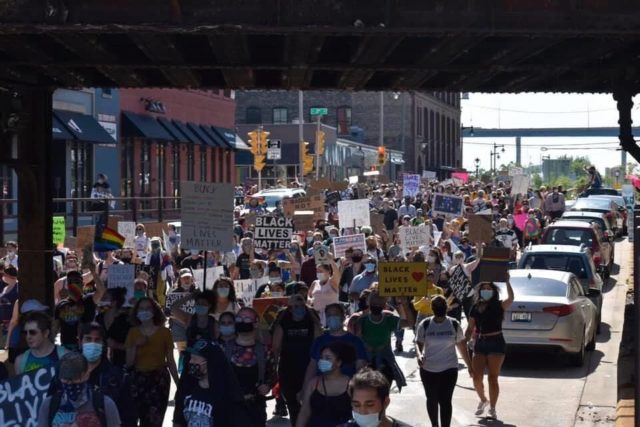 Last year during Pride Month, a small group of activists organized the first-ever “March with Pride” for Black Lives Matter demonstration in Milwaukee. Angel Vega was part of that organizing team and is currently helping to plan this year’s march, which set for Sunday, June 13.

“Going back to like the first couple of prides, you know, it started with the riot and started with our Black and Brown trans sisters. And I feel that we need to connect to those roots. We need to celebrate every day.”

Vega says he has always been involved in activism, even as a youth, organizing and participating in marches, both for the undocumented and queer communities.

“So I felt that I needed to do something and use my skills. If there’s going to be a march, like, let me offer my services.”

The team — led by Montell Infiniti Ross and including Elle Halo, Kat Klawes, Hugo Beam and Vega — got right to work and organized the march in just four days. It was a tight timeline, but the urgent work work paid off; the march was a massive success and drew roughly 5,000 people.

Lead organizer Montell Infiniti Ross says it was a beautiful demonstration and compares it to a beautiful cake or a perfect recipe; it was just right.

“Specifically for my our Black and Brown communities, we are like, ‘Look at what’s happening for us,'” Ross says. “But from our supporters and our allies, our white community, it was like, ‘I felt so proud to be able to stand as a white LGBT person or a white trans person in solidarity with my Black brothers and my Black sisters, and being able to show them like, we stand together as a community, whatever color you are, we stand together as a community for you.”

“And it just, it reinforced why this year had to happen because we rock like to do things like that,” Ross says.

This year’s march will begin at noon on Sunday, June 13. People are invited to gather in front of the Summerfest main gate, with a rally beginning at 1 p.m. The march itself steps off at 2 p.m. and will wind through Walker’s Point, following the same route as last year.

But what’s different this year is an added celebration at Juneau Park from 4 to 7 p.m.

“We’ll have vendors there. We plan to have DJ music, and hopefully possibly even a drag show,” Ross says.

Organizers say they will also be offering Covid testing and vaccines on-site and are encouraging everybody to be as safe as possible. But Ross says the community just needs this right now, especially with PrideFest and the Pride Parade canceled for the second year in a row. This, he says, is a reason to come together for change, for pride.

“Intersectionality. I feel that once people start to learn about our intersections, I feel that there’s going to be more unity,” Vega says.