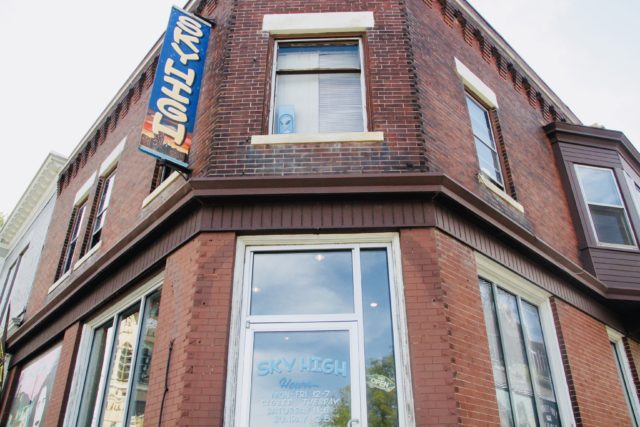 Sky High skate shop is celebrating 30 years of service to Milwaukee and Racine’s skateboarding community. Meet Aaron Polansky—the shop owner since 1999. Listen to him tell his story on how Sky High made it to 30 years and how it will continue to serve Milwaukee’s skate scene for years to come. 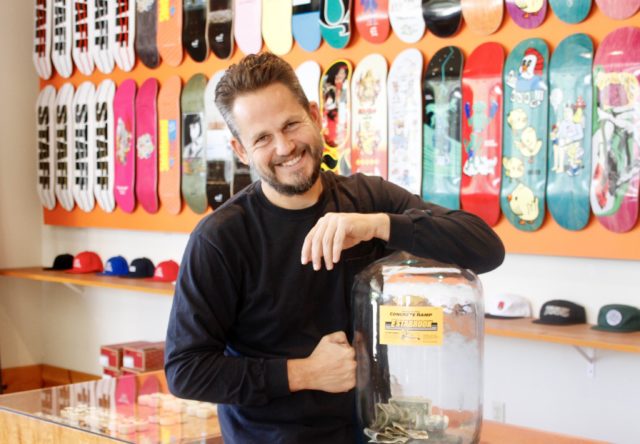 Sky High first opened its door in 1988 in Racine and Polansky began working there in the early 1990s. During breaks from college he would come home to manage the shop, but he had no idea he’d become part of its 30-year legacy.

The ’90s and early 2000s were a hot time for the sport of skateboarding. Competitive skateboarding became popular and skaters were able to become well-paid professionals with endorsements. Tony Hawk stirred the scene after he entered the video game world with the “Tony Hawk Pro Skater” and “Tony Hawk Underground” series. This surge inspired Polansky to commit to Sky High and to Milwaukee.

The shop did a short stint on Highway 100, but after Polansky took over the shop in 1999, he brought it to Bay View. “I immediately found this building when I moved into Bay View,” said Polansky of Sky High’s corner location Howell and Clarence that he moved into in 2003.

Sky High quickly became a hub for Milwaukee’s skaters. Skate parks such as Four Seasons and Cream City especially thrived during Milwaukee’s winters, but Polansky used the summer to his advantage. He’d host block parties where the public was invited to skate ramps and rails while cooking out. He drove ramps around to other local parks and hosted “traveling skate parks.” He’s also the builder behind Estabrook’s tennis court skate park.

In the mid-to-late 2000s, skateboarding quickly became commercialized. Athletes began making more money with endorsements and the sport became more marketable. When chain stores started to sell skateboard merchandise, local shops like Sky High began to struggle. In spite of the cultural shift, Polansky cruised into 2018 to celebrate its 30th birthday. For this, he thanks the local community and his customers who he calls his friends.

Polansky plans to continue catering to Milwaukee’s skate scene. He hopes to bring outdoor public skate parks to Milwaukee and says he’s excited to see skaters of all ages come into his shop. He also will continue to work on building Estabrook.

“Estabrook needs to happen in every empty court in the city” said Polansky. “If I had the time and the permission, I would do it…That’s why I’m here.”

If you’re interested in learning more about Estabrook, or donating to its fund, visit the skate park’s website here.