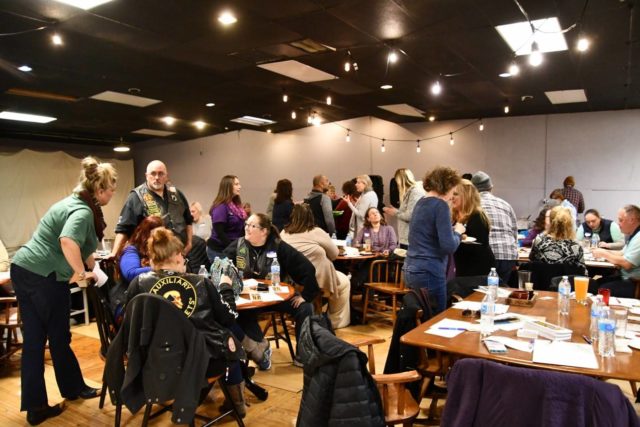 As crowdfunding sites like Kickstarter and GoFundMe have launched the concept of “micro-fundraising” into the nation’s collective knowledge and funded countless movies, games, TV shows, etc., it’s safe to say that the concept appeals to a wide array of individuals and is here to stay. The phenomenon has even been seen in our own city with projects like Light the Hoan and RampUpMKE being funded online through small contributions adding up to create a big impact.

However, the online method of micro-fundraising lacks an aspect which can’t truly be replicated: face-to-face interaction and engagement. This is where Southside SOUP comes in.

Beginning in 2017 (and adapting a similar Detroit event known as “Detroit SOUP“), the event happens two to three times a year and brings together 50-80 neighbors from Milwaukee’s southern half for a Sunday night soup supper. Attendees pay from $1 to $50 for a seat and this all goes into a pool (the dinner is donated). During the dinner, four preselected individuals present their proposals for a project which will benefit the community.

At the conclusion of the presentations, the presenters have a chance to chat more directly with the audience to answer questions and clarify details. The attendees then vote on which idea they find the most beneficial and the winner receives the entirety of the revenue (typically $500-$800) to complete their project. At the subsequent SOUP event, the winner returns and kicks off the evening by offering a progress report on their initiative.

Over five events, $3100 has been awarded to six projects. This includes: tools for community cooking classes at the Bay View Community Center, food for a model UN club field trip to Chicago for Fernwood Montessori School, materials for the gardening program’s hoop houses at Parkside Middle School of the Arts, a public forum event which introduced and elevated the voice of women running for public office known as “The Missing Voice,” and two veteran related projects which split the pool: art supplies for an art club for homeless veterans to create art which was sold at a gallery within a Bay View church, and seeds and compost for a community garden meant to help veterans suffering from PTSD and moral injury.

The event is sponsored by the Bay View Neighborhood Association and founded by current vice president of the BVNA board, Mary Ellen Hermann and former president of the board, Christopher Miller. Besides funding projects which the community feel matter, the greatest goal of the event is to foster a sense of community among the diverse population through face-to-face discussion. As Miller explains, “The idea is that this kind of event can both help build, and also become, a community — winners return and share their stories; we all can learn collectively … community is required for us to flourish.”

The idea is that this kind of event can both help build, and also become, a community.

Further, Hermann sees the event as an opportunity to help individuals realize that they can make a difference. “Through SOUP, (people) can make an impact on what goes on around them (and) who knows better than they do what needs to be done? … It empowers them for continued good and … inspires others who attend to see and try the same.”

Moreover, the event offers a platform for individuals to hear what their neighbors find important and want to see improved. Even if a project doesn’t win the award pool at the end of the night, there is a chance it may be funded outside of the event by those who were inspired by the concept and at the very least, awareness of a problem which may have previously been overlooked will be raised.

Additional “SOUP cells” have begun to appear across Milwaukee County as a result with one sponsored by the South Shore Chamber of Commerce appearing in the St. Frances-Cudahy area and having held three similar events to date.

The next Southside SOUP event will be held on Sunday, Sept. 29 at Emerald City Catering located at 3555 S. 13th St. More details can be found on Facebook or the Bay View Neighborhood Association’s site.