A hidden history of Usinger’s stables

A hidden history of Usinger’s stables 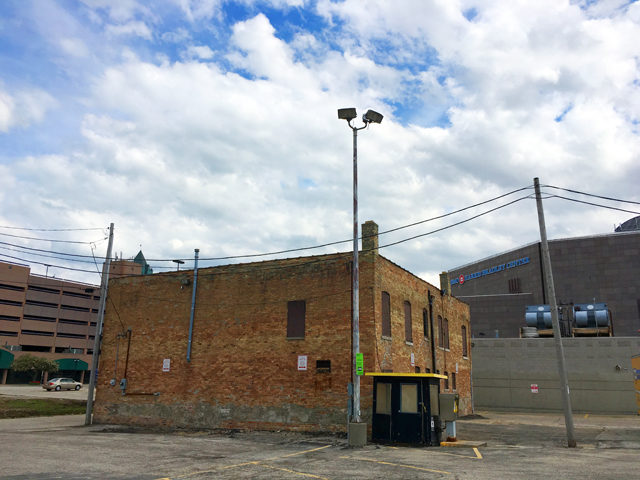 Art's garage is the only evidence left of a once vibrant community downtown.

Have you seen this modest brick building downtown?  Keep reading for the Milwaukee story behind its walls.

It may be hard to believe the area in Downtown Milwaukee near the BMO Harris Bradley Center used to be a vibrant neighborhood.  Not much is left in the housing department, except for a small, two-story brick building in an alley between 4th and 5th Streets.

The building is primarily used as a small storage unit for the Bradley Center, but that wasn’t always the case.

Bobby Tanzilo from OnMilwaukee got some insight on its history when he found an old Usinger’s sticker inside while touring the building for his Urban Spelunking column.

The first floor was a stable for the horses used to deliver sausage around Milwaukee. On the second floor, remnants can still seen of an apartment where a salesman lived with his family.

The building was nicknamed “Art’s Garage,” named after Art Schoen, who lived in there until his death in the 1980s.  He worked for Usinger’s for over 60 years, delivering and selling sausage from his horse-drawn cart.

His son, Lloyd Schoen, grew up in that apartment and lived there until he joined the Navy in the 1940s.  And at age 92, he still sees the house he grew up in on a regular basis — he runs Lloyd’s Parking in the lots around the arena during events.

In the coming months, the building will be torn down to make room for the new Bucks arena.

Click the player above to hear Nate and Bobby’s interview.