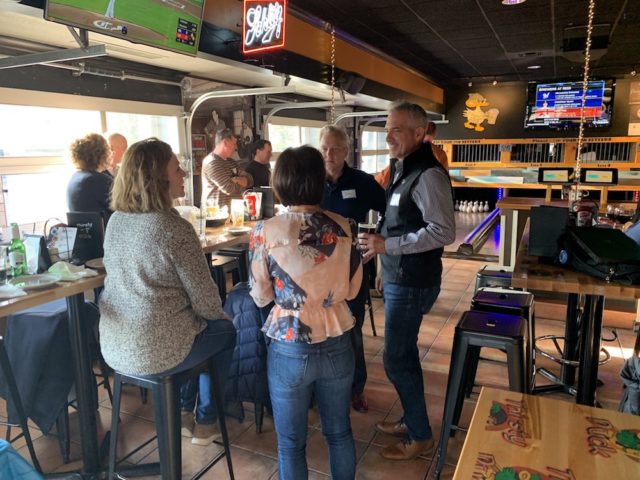 Bob Norman is the director of human resources at Eppstein Uhen Architects. He has spent majority of his career at the firm, first as a project manager then eventually leading the company’s HR department.

I asked him what it was like sitting on the other side of the interview.

I met Bob through the Wisconsin Parkinson Association. He’s at the height of his career right now, but every day, he deals with a mild form of Parkinson’s disease.

“I was eventually diagnosed in 2012. It was interesting because the initial reaction was, ‘Oh my gosh, I have Parkinson’s.’ And then the next reaction was, ‘Well, great, at least I know what it is and then can deal with it,'” he says.

For years prior to his diagnosis, he has been dealing with symptoms, but he didn’t know the cause. It was frustrating to say the least.

And diagnosing Parkinson’s disease is tricky. There is no test. Instead, it’s more of a clinical process of elimination with your doctor, looking at how symptoms present themselves.

For Bob, even though his case is mild, he still deals with daily fatigue and has trouble getting his body moving.

But he says the biggest difference-maker has been getting regular exercise. He has been taking it even more seriously the last few years, waking up before dawn for regular workouts with the November Project.

And beyond physical activity, he says connecting with other people living with Parkinson’s helps a lot, too.

He’s part of the “Working Professionals with Parkinson’s: Cocktails and Conversations” group. It’s a purely social program offered by the Wisconsin Parkinson association.

Tonight, the group is duckpin bowling at Thirsty Duck in Wauwatosa.

“We meet at a restaurant or a place where we talk about Parkinson’s a little bit. And then we talk about the struggles that we’ve had or are having, share advice on how to communicate with our coworkers,” Bob says. “But really it’s also a community to just talk with people that understand what we may either be going through or have gone through before.”

Combined with exercise, Bob says having a support network helps, and he gets a lot of joy from being there for others. All of it together keeps his outlook positive, which is so important, he says.

“Everyone has things that they’re dealing with. So I don’t need to have a pity party for me, because I know people are going home and dealing with other things, too. That’s just my ‘thing.'”

The support group gets together every month. On May 15 it visits Matty’s Bar & Grille in New Berlin. On June 27 it meets at the Milwaukee Ale House. Both meetings start at 5 p.m. and include appetizers and a cash bar.