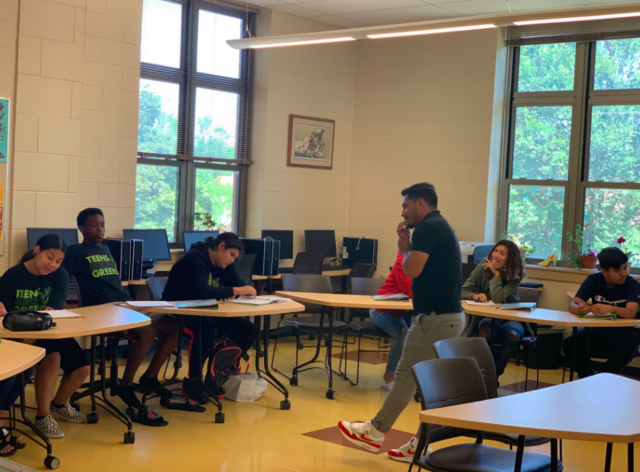 When you hear about the program Teens Grow Greens, you might just assume that teens are just planting greenhouses and growing produce. Well, you’re not completely wrong since that is a component but the main element that’s being planted is themselves.

Teens Grow Greens has been focused on the North Side of Milwaukee for six years and this summer is the first summer that the program has extended its doors to the South Side. However, there is a slight variation. Instead of a nine-month program, Teens Grow Greens are testing a 12-week pilot program. Charlie Uihlein, Co-Founder and Executive Director of Teens Grow Greens, said they expanded simply because there was a demand.

“Neighborhood organizations, as well as community organizations, reached out to us,” said Uihlein. “We also had a lot of students from who either lived or go to school on the South Side who said they wanted to part of the internship, but we found that in the past transportation it was too much to get from the South Side all the way to the North Side.”

If you visualize this program as a tree, the roots are essentially the foundation. Teens Grow Greens call this foundation “The 3 R’s” which are respect, responsibility and resilience. Then, the foundation turns into tree branches which are leadership, healthy living, and self-efficacy. Wilson says their attention is on the students.

“Our main focus with the teens is always just personal development,” said Wilson. “We take a very human-centered approach, we try to get to know each teen, where they are when they enter the program and  just wanting them to grow as an individual.”

The South Side interns spend some of their time participating in a program called Kids Grow Greens where the interns mentor third through fifth-grade students. Some of their responsibilities are reading books that revolve around traits like grit and emotion in order for kids to develop a sense of character. They also have cooking classes where they teach kids how to grow food and eat healthily.

Cyprus Mooreschild, one of the interns, said his favorite part of the program is the people and the field trips.

“They don’t seem like work,” said Mooreschild. “One time we went to Chicago and we went on Yacht where they had a buffet, a DJ, it was a big boat and we got paid to do this.”

Teens grow greens hopes to extend the south side internship to the full nine months in order to continue impacting students across Milwaukee.