The bizarre story of the 1985 song that saved(?) the Milwaukee Bucks

The bizarre story of the 1985 song that saved(?) the Milwaukee Bucks 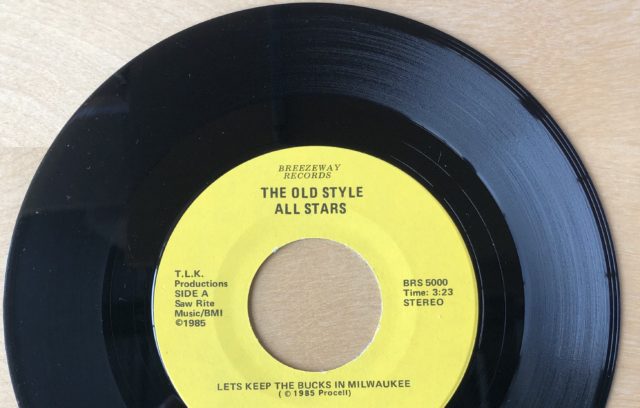 The Milwaukee Bucks are having a landmark season, in a landmark time, for the franchise.

But the team would not have been here if it weren’t for passionate fans, fighting to keep the team in Milwaukee, embodied by a harebrained scheme to make a song that would save the franchise.

“Let’s Keep The Bucks In Milwaukee” by The Old Style All Stars. The 1985 supergroup formed with one goal — to save the Milwaukee Bucks from leaving town.

In 1985, the Bucks were up for sale. Jim Fitzgerald owned the team since 1976, but less than a decade later he was having health problems. Some of the other people he owned it with wanted out, too. The Bucks were in one of the smallest markets in the league, and they were playing at The Mecca, the smallest capacity arena in the country. So, whoever bought the Bucks would also have to build a new arena.

The Bucks were HOT at this time. This was the Sidney Moncrief era. The Marquese Johnson era, too. Five divisional titles in a row. Back-to-back conference finals appearances. The team was on fire, and the city loved them. But the prospect of building a new arena in the smallest market in the country made it ripe for a rich owner to buy the franchise and move the prize team to a new city.

With our backs against the wall there was only one thing to do. Get a rag-tag group of Milwaukee musicians together to write a song, press it onto a 45 and sell enough novelty records to raise the money to keep the Bucks in Milwaukee AND build a new arena.

That’s when The Old Style All Stars were formed. 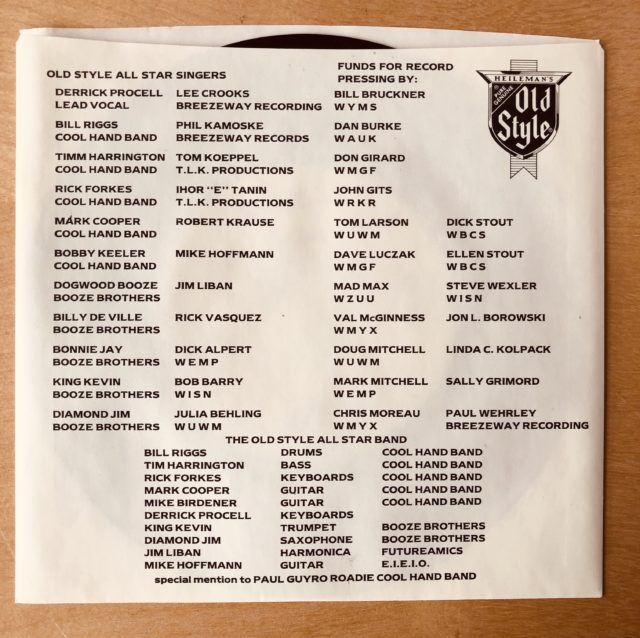 The back of the record sleeve shows the All Star lineup.

They were a group of musicians from half a dozen Milwaukee bands, including The Booze Brothers, Cool Hand Band, E.I.E.I.O. and The Futureamics. With the backing of local DJs, they got into a studio to write and record their original song, “Let’s Keep The Bucks In Milwaukee.” The song is a beer chugging, arm pumping 1980’s anthem. According to the sleeve’s liner notes the song was “dedicated to Milwaukee, in hopes that we can keep our beloved Bucks right here where they belong.”

And, you know, IT WORKED.

They definitely didn’t raise the money by selling 45s. In fact, almost none of them exist today, and they are incredibly rare. But their spirit to get the Milwaukee rallied around the team put something cosmic into the air. 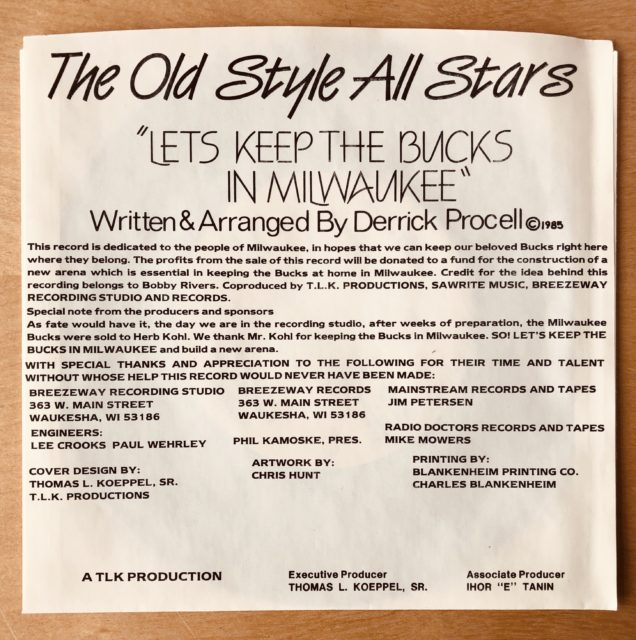 The front of the rare vinyl liner notes.

While the All Stars were in the studio, Herb Kohl, owner of the Kohl’s Corporation, bought the Bucks. He didn’t buy the team because he saw money to be made, he bought them because he wanted to keep the Bucks in Milwaukee. Four days later, Jane Bradley Pettit and Lloyd Pettit announced they would donate the money to build a center for the Bucks.

It was scrappy. It took all hands on deck, everyone in the city — big and small — banding together.

They did it. They kept the Bucks in Milwaukee, where they remain today.

A thank you to the Instagram account @HardwoodBucks for posting the picture of the 45 that launched the idea for this story. You can still actually buy this song off the RockIt Records website here.